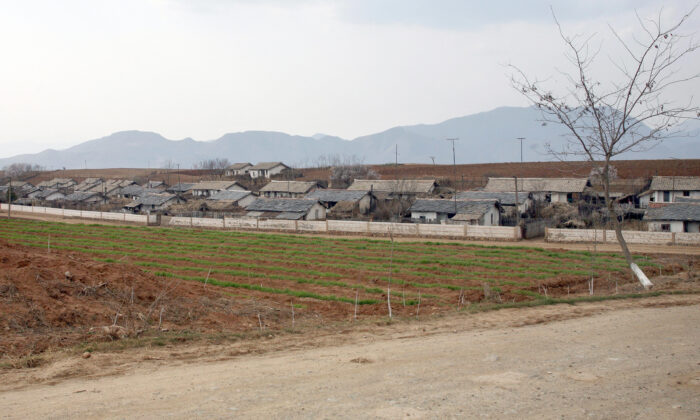 Collective farms in North Hwanghae Province, close to Pyongyang, as seen from the road between Pyongyang and Kaesong, on April 25, 2007. (AFP/AFP via Getty Images)
Asia & Pacific

Since the start of COVID-19, North Korea has adopted the most stringent lockdown globally, further intensifying its economic difficulties. Reports suggest an increased number of army deserters, an inability to print money, and a lack of food and medical supplies. North Korea’s worsened living conditions may force it to open its borders to China and Russia as early as November.

According to South Korea’s National Intelligence Service members on Oct. 28, North Korea is preparing to lift its lockdown measures toward China and Russia and currently negotiating to resume railway transportation and trade with the two countries, indicating a possible start in this month.

Since the Chinese Communist Party (CCP) virus outbreak in January last year, North Korea has suspended all border transactions, including with China. The bilateral trade between China and North Korea has decreased significantly.

However, in the past few months, North Korea has shown signs of accepting international aid. According to South Korea’s National Intelligence Service, North Korea has increased the intake of humanitarian goods since July. And in August, medical and pandemic supplies were allowed to enter the country, suggesting that North Korea may further open its ports.

North Korea’s economic crisis has reportedly plagued its central bank. Its currency issuance has been suspended due to the lack of special paper and ink imports needed for money printing. A lesser quality temporary currency was produced using “North Korean-made papers.”

Meanwhile, the lack of imports and trades has caused the North Korean government to forcibly start its factories, causing some factories to overload, resulting in frequent factory explosion accidents. And the shortage of public emergency medical supplies has led to the spread of water-borne infectious diseases such as typhoid fever.

In addition, the number of deserters in the North Korean military has increased by more than 80 percent compared with the previous year. According to Ha Tae-keung, an intelligence committee member in the South Korean National Assembly, this increase was primarily due to North Korea’s economic deterioration and its government forcefully mobilizing soldiers into labor, such as construction sites.

Clocks Stopped Due to Battery Shortage

In July, Joo Seong-ha, a defector from North Korea and a reporter at Dong-a Ilbo, a South Korean newspaper, wrote a column, “Time Has Stopped in North Korea.” The article revealed that ordinary people in North Korea have little way to tell time; their wristwatches and wall clocks have stopped due to no batteries.

Joo said that Chinese watches, wall clocks, and batteries dominate in North Korea. And since the border has been closed for more than a year due to the CCP virus, North Koreans have no access to batteries.

“Although cell phones are widely available in large cities such as Pyongyang, few people in the poor rural areas have cell phones. Televisions are rarely on due to power outages, and mostly only air in the evening when electricity is available. Even fewer homes have computers or laptops. There is pretty much no way to tell time. Everything is in chaos as people can’t make appointments,” Joo said.

“A society that can’t tell time is in no way a modern society,” he said.

“A society that can’t tell time will be experiencing a whole new world, even for those who overcame the horrors during the “March of Suffering,” Joo added.

“March of Suffering” is the North Korean authorities’ euphemism for famine. It is also called the Arduous March, referring to the Great Famine that occurred in North Korea from 1994 to 1998. It was a period of mass starvation together with a general economic crisis, and an estimated more than 3 million people starved to death.

More Than Half the Population May Go Hungry

Food shortages have been a major problem in North Korea. Prior to the CCP virus pandemic, North Korea often relied on imports and aid from China to make up for poor harvests.

In response to this year’s food supply shortages, North Korean authorities reportedly issued a general mobilization order directing its citizens to the rural areas to help with food harvesting, according to a South Korean National Intelligence Service report on Oct. 28.

The report estimated that North Korea had completed its autumn rice harvest around Oct. 20. Due to longer daylight hours, its total grain output is expected to exceed last year.

However, a U.S.-based think-tank said data gathered by satellite point to a yield that falls short of an average or good harvest.

“While not yet a crisis of famine proportions, the negative trend, combined with external factors such as low yields in the previous year and flood damage to the northeastern croplands and crop transport infrastructure, aggravate the food insecurity in the country,” the Center for Strategic and International Studies said in a report released on Oct. 4.

The U.S. Department of Agriculture estimated that 63.1 percent of the North Korean population, approximately 16.3 million people, are suffering from a food shortage. This number has increased by 1 million compared to last year, according to the “International Food Security Assessment 2021-2031” released in July.

The report also estimated that North Korea’s food shortage this year was 1,041 million tons. That’s about 200,000 tons more than the 860,000 tons predicted by the U.N. Food and Agriculture Organization (FAO).