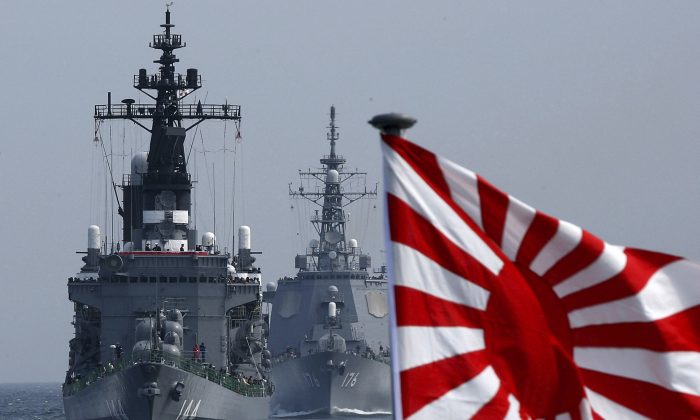 North Korea is fuming over news Japan is making a series of investments in its self defense force that give it better offensive capabilities in the face of threats from North Korea.

Among the upgrades, Japan could convert its helicopter carriers into aircraft carriers with the purchase of F-35B vertical-takeoff strike fighters.

The Japan Times reported the move in late December and on Jan. 10 North Korean state media said “Japanese reactionaries” were  preparing “military operations for aggression in any region and any time at will.”

The North Korean newspaper, the Minju Joson, is a specialized publication meant for the inner circle of the North Korean regime, keeping the cabinet and senior officials attuned to Kim Jong Un’s thinking.

The possibility that Japan could gain an offensive capability from the purchase of F-35Bs, which would let the four-island nation project air power beyond its shores, has rattled the North Korean leadership.

The editorial also takes aim at the Japanese defense ministry plan to set up a senior unit commanding space, cyber, and electronic warfare and the possibility of Japan making its own long-range cruise missiles.

The commentary makes no mention of previous North Korean threats towards Japan, including a statement in September calling for Japan’s nuclear annihilation.

“The four islands of the archipelago should be sunken into the sea by the nuclear bomb of Juche. Japan is no longer needed to exist near us,” wrote North Korea’s foreign affairs and propaganda committee in a September 2017 statement. “Juche” is the official ideology of North Korea and is usually translated as “self reliance.”

“The goal sought by Japan, going keen on the ambition for overseas aggression, is turning the country into a military giant.”

North Korea has a fraught history with Japan due to Japan’s colonization of the peninsula from 1910 to the end of World War II in 1945.

But after WW II, Japan transitioned to a free market democracy, one of only five Asian territories to make it into the top 50 of the Cato Institute’s Human Freedom Index for 2016, along with Hong Kong, Taiwan, South Korea and Singapore.

The editorial alleges that Japan’s overseas aggression is becoming “a stark reality.”

North Korea frequently takes aim at Japan, which is blamed second only to the United States as a scapegoat for the country’s ongoing ills, including disastrous policies that have left the vast majority of the population outside the capital city of Pyongyang in a constant state of hunger.

North Koreans have long been told an attack from U.S. forces is likely, and thereby requires the entire nation to sacrifice its time and resources to maintain military preparedness.

North Korea’s “songun” or military-first policy sees the needs of the military predominate all other needs of the society. It is the principal idea the regime uses to justify its repressive policies.

Japan has faced ongoing threats from North Korea as the current nuclear crisis has escalated.

Those threats include North Korea firing two ballistic missiles over Japan and landing its most powerful missile to date within 200 nautical miles of the Japanese coast on Nov. 28.