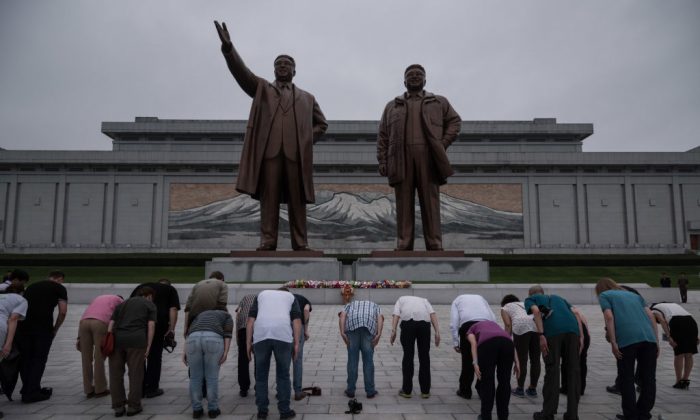 A group of tourists—on command from their guide to bow deeply—bow before statues of late North Korean leaders Kim Il-Sung (L) and Kim Jong-Il (R), on Mansu Hill in Pyongyang on July 23, 2017. North Korean authorities have increased the amount of 24-hour guarding at sites like this to prevent vandalism. (ED JONES/AFP/Getty Images)
Asia & Pacific

North Korea’s many depictions of the ruling Kim family—murals, paintings, and other so-called “idolization objects”—are getting increased security, according to sources inside the country.

DailyNK—a news site based in Seoul known for gaining access to reliable sources inside its North Korea—is reporting that North Korean authorities have given orders to increase the security presence at sites that idolize the three generations of the ruling Kim family.

“Orders have been handed down to increase attention towards ‘eternal life’ towers, oil paintings, and wall murals located all over the country. Public security officers have been mobilized for night patrols,” a Pyongyang source told Daily NK during a phone call on Oct. 20.

Normally, special guards are assigned to guard the objects around the clock during special occasions, including major holidays such as the birthdays or death anniversaries of Kim Il Sung and Kim Jong Il.

With the new order, guards are tasked with protecting the sites during the busy harvest season, when farmer-soldiers need to tend the fields, and at other times.

According to DailyNK, the new guarding schedule has led some residents to say among themselves that “The country’s situation doesn’t look good.”

For those tasked with protecting the sites, any damage would be career-ending. The orders to add additional protection have been repeated several times, the source said.

“Agencies have constantly been saying, ‘Use lights to illuminate statues and paintings of the three generals of the Mount Paektu bloodline [the Kim family dynasty] and thoroughly care for them to ensure that hostile elements cannot damage them.’ Local units are increasing the number of personnel tasked with strengthening security,” said the source.

Photos from the communist state frequently depict children cleaning the area around important idolization sites, or show crowds of North Koreans bowing to statues or paintings.

Any vandalism of the sites would be a significant act of rebellion. If the perpetrator was caught, it would likely lead to imprisonment in one of the regime’s notorious concentration camps. Under the regime’s “three generations of punishment” policy, it’s possible the perpetrators’ family could be imprisoned as well.

The source told DailyNK that the order covers oil paintings, towns, and cities.

“It also includes expanded surveillance efforts for pictures of the leaders at regional schools. In the past, special guards were dispatched to watch over these items during holidays. The reason behind the change remains unclear.”

The sources said the increase in patrols at such sites stands out noticeably in the capital city of Pyongyang.

“In most regions of Pyongyang, power is being supplied to light up the most important propaganda objects from 7 p.m. to 5 a.m. Patrolmen and other security guards are protecting the sites in shifts,” a separate source in Pyongyang told DailyNK.