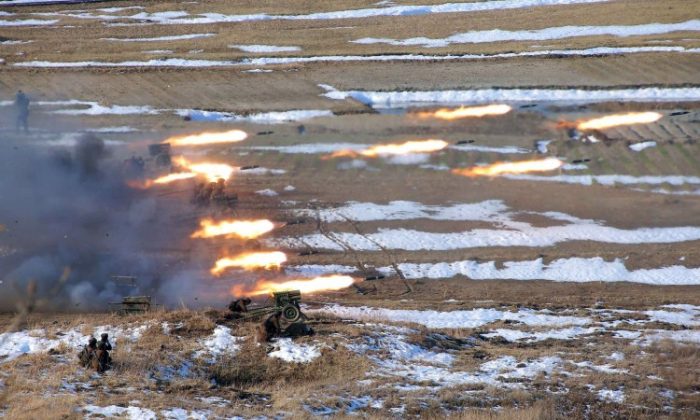 SEOUL, South Korea—North Korea’s military warned Tuesday that its artillery and rocket forces are at their highest-level combat posture in the latest in a string of bellicose threats aimed at South Korea and the United States.

The announcement came as South Koreans marked the third anniversary of the sinking of a warship in which 46 South Korean sailors died. Seoul says the ship was hit by a North Korean torpedo, while the North denies involvement.

Seoul’s Defense Ministry said Tuesday it hasn’t seen any suspicious North Korean military activity and that officials are analyzing the North’s warning. Analysts say a direct North Korean attack is extremely unlikely, especially during joint U.S.-South Korean military drills that end April 30, though there’s some worry about a provocation after the training wraps up.

The rival Koreas have had several bloody naval skirmishes in disputed Yellow Sea waters since 1999. In November 2010, a North Korean artillery strike on a South Korean island killed two marines and two civilians.

North Korea, angry over routine U.S.-South Korean drills and recent U.N. sanctions punishing it for its Feb. 12 nuclear test, has vowed to launch a nuclear strike against the United States and repeated its nearly two-decade-old threat to reduce Seoul to a “sea of fire.” Despite the rhetoric, outside weapons analysts have seen no proof that North Korea has mastered the technology needed to build a warhead small enough to mount on a missile.

On Tuesday, the North Korean army’s Supreme Command said it will take “practical military action” to protect national sovereignty and its leadership in response to what it called U.S. and South Korean plots to attack.

The statement, carried by the North’s official Korean Central News Agency, cited the participation of nuclear-capable B-52 bombers in South Korea-U.S. drills.

North Korea’s field artillery forces — including strategic rocket and long-range artillery units that are “assigned to strike bases of the U.S. imperialist aggressor troops in the U.S. mainland and on Hawaii and Guam and other operational zones in the Pacific as well as all the enemy targets in South Korea and its vicinity” — will be placed on “the highest alert from this moment,” the statement said.

The North’s recent threats are seen partly as efforts to strengthen internal loyalty to young leader Kim Jong Un and to build up his military credentials.

Kim “needs to show he has the guts. The best way to do that is to use the military might that he commands,” said Lee Yoon-gyu, a North Korea expert at Korea National Defense University in Seoul. “This paves the way for greater praise for him if North Korea makes a provocation later and claims victory.”

Kim will eventually be compelled to do “something provocative to prove the threats weren’t empty,” Lee said.

Meanwhile, websites and organizations run by North Korean defectors in South Korea said they suffered cyberattacks on Tuesday, one week after computer systems at some South Korean banks and TV networks were widely disrupted.

Yonhap said a computer network used by seven local governments was also briefly attacked, as was a network belonging to broadcaster YTN.

Authorities have not confirmed who was behind last week’s cyberattack but suspect North Korea.

At a ceremony marking the third anniversary of the warship sinking, new South Korean President Park Geun-hye urged the North again to abandon its nuclear weapons program. “Focusing its national strength on the development of nuclear weapons while its people are suffering starvation … will only bring international isolation to themselves,” Park said in a televised speech at a national cemetery south of Seoul where the 46 sailors are buried.