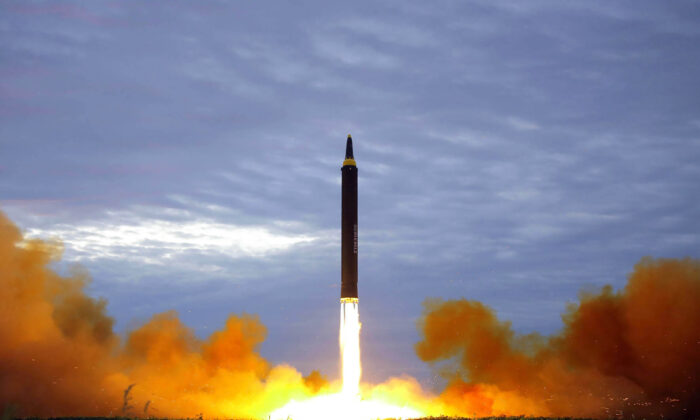 North Korea fired a “suspected ballistic missile” toward the Sea of Japan on March 24, the Japanese prime minister’s office said in a statement.

He later delivered instructions to “dedicate maximum effort to gather and analyze information, and provide the public speedy and adequate information” regarding the missile launch and ensure the “safety of aircraft, vessels, and other assets.”

His office also said it would take “all possible measures for precaution, including readiness for contingencies.”

Japan’s coast guard said the missile landed about 170 kilometers (105 miles) west of Aomori in northern Japan, outside of Japan’s exclusive economic zone, according to local reports.

South Korea’s coast guard sent an alert about the launch at 2:49 p.m. local time and the missile landed at around 3:44 p.m., indicating a flight time of around 65 minutes, according to reports.

However, Japan’s defense ministry said the suspected ICBM flew for about 71 minutes and a distance of 1,100 kilometers (683 miles).

South Korea’s defense ministry hasn’t yet confirmed whether it was an ICBM.

ICBMs haven’t been test-fired at full range since November 2017 by North Korea, when it fired a Hwasong-15, which experts say is capable of delivering a nuclear weapon anywhere in the United States.

Both the United States and South Korea have warned that North Korea may be preparing to launch an ICBM at full range. To do so would be a violation of U.N. Security Council resolutions.

North Korea has been conducting a string of missile tests since the start of this year.

On Jan. 17, it fired a Hwasong-12 intermediate-range ballistic missile, which has an estimated range of 4,500 kilometers (2,796 miles) and is capable of striking the U.S. military base in Guam with a nuclear warhead.

On Feb. 26, just days after Russia began its invasion of Ukraine, North Korea launched what is believed to be the first-stage rocket for Hwasong-17, a newer ICBM that experts believe could hit anywhere in the continental United States.

Another test was conducted a week later, on March 4, and another suspected missile was launched on March 16, which appeared to explode in midair over Pyongyang shortly after liftoff.

“The purpose of these tests, which did not demonstrate ICBM range, was likely to evaluate this new system before conducting a test at full range in the future, potentially disguised as a space launch,” said Pentagon spokesman John Kirby.

The March 24 launch would be at least the 13th ballistic missile test-fired by North Korea this year, according to reports, prompting condemnation from officials in the United States, South Korea, and Japan.

Bill Pan and Reuters contributed to this report.