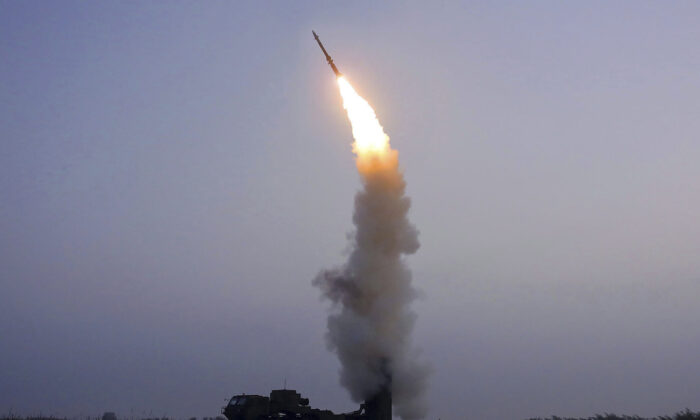 This photo shows what North Korea claims to be the test firing of a newly developed anti-aircraft missile in North Korea, on Sept. 30, 2021. Independent journalists were not given access to cover the event depicted in this image distributed by the North Korean government. The content of this image is as provided and cannot be independently verified. (Korean Central News Agency/Korea News Service via AP)
Asia & Pacific

SEOUL—North Korea fired a newly developed anti-aircraft missile on Thursday, state media KCNA reported on Friday, the latest in its recent series of weapons tests amid deadlocked denuclearisation talks with the United States.

The test conducted by the Academy of Defence Science, a military weapons developer, was aimed at confirming the practical functionality of the missile’s launcher, radar, comprehensive battle command vehicle and combat performance, KCNA said.

North Korean leader Kim Jong Un appears to have not attended the test, which was instead overseen by Pak Jong Chon, a member of the ruling Workers’ Party’s powerful politburo and Central Committee.

South Korea, Japan and the United States typically publicly confirm North Korean missile launches soon after they occur, but did not do so for Thursday’s test, indicating it may not have been a major weapons test.