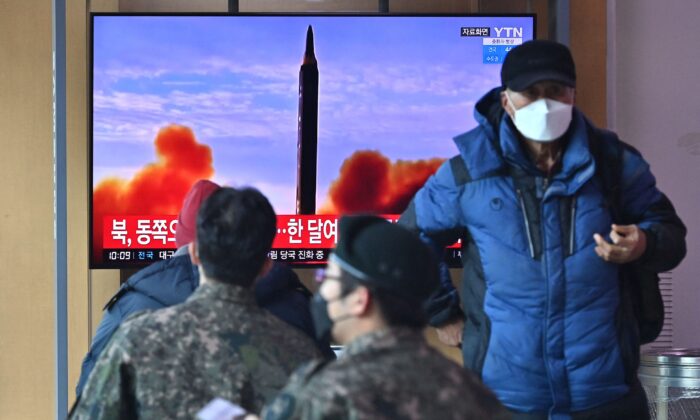 In its latest move that could ramp up tension on the Korean Peninsula, North Korea on March 20 fired four projectiles into the Yellow Sea, South Korean military officials said.

The launches were from an unspecified location in western North Korea and fell into the sea off the nation’s west coast during a span of an hour around 7:20 a.m. local time, according to officials, Yonhap News Agency reported.

“There were shots believed to be that of North Korea’s multiple rocket launchers this morning,” an official from the South Korean military said at an emergency meeting, adding that the South Korean force is “maintaining defense readiness posture” while closely monitoring the developments.

North Korea has been conducting a string of missile tests since the beginning of this year. On Jan. 17, it fired a Hwasong-12 intermediate-range ballistic missile, which has an estimated range of 4,500 kilometers (2,796 miles) and is capable of striking the U.S. military base in Guam with a nuclear warhead. This type of missile was last tested in 2017 with three successful flights and three failures.

On Feb. 26, just days after Russia began its full-scale military offensive against Ukraine, North Korea launched what is believed to be the first-stage rocket for Hwasong-17, a new intercontinental ballistic missile (ICBM) that may have the range to hit anywhere in the continental United States. Another test was conducted a week later, on March 4, drawing condemnations from South Korea, Japan, and the United States.

“The purpose of these tests, which did not demonstrate ICBM range, was likely to evaluate this new system before conducting a test at full range in the future, potentially disguised as a space launch,” said Pentagon spokesman John Kirby.

Pyongyang’s most recent missile test was conducted on March 16. Seoul officials believe that test ended in failure, with the missile appearing to have blown up after liftoff due to a problem with its engine.

When asked whether Washington is planning to intensify pressure on Pyongyang, which appears to be taking advantage of the ongoing Russia–Ukraine conflict to pursue its weapons development, a spokesperson for the U.S. State Department said the Biden administration keeps the door open for diplomacy, but the Kim regime has no response.

“We continue to seek diplomacy and we’re prepared to meet without preconditions,” Jalina Porter, the department’s principal deputy spokeswoman, said at a March 18 press briefing. “President [Joe] Biden himself has also made clear that he’s open to meeting with Kim Jong Un where there is a serious agreement on the table which we need to be on the basis of working-level negotiations, because as we’ve seen in the past administrations, leader-level summits alone are no guarantee of progress.

“The DPRK continues to not respond.”

South Korean officials previously said North Korea is likely preparing to launch a reconnaissance satellite ahead of April 15, which marks the country’s most important event for this year—the 110th birth anniversary of Kim Il Sung, the founder of the Kim regime and current leader Kim Jong Un’s grandfather.