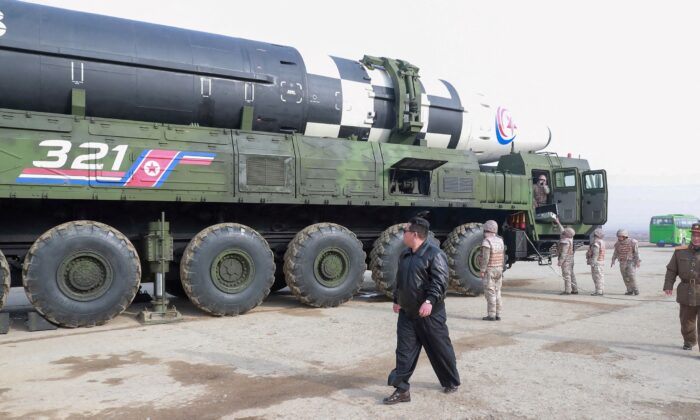 North Korean leader Kim Jong Un walks next to what state media reports is the "Hwasong-17" intercontinental ballistic missile (ICBM) on its launch vehicle in an undated photo released on March 25, 2022. (KCNA via Reuters)
Asia & Pacific

SEOUL—North Korea fired three ballistic missiles towards the sea off its east coast on Thursday, South Korea and Japan said, in the latest tests aimed at advancing its weapons program, even as it first reported a COVID-19 outbreak.

Three short-range ballistic missiles were fired at around 18:30 (0930 GMT) from the Sunan area of North Korea’s capital, Pyongyang, where an international airport is located and where it fired its largest intercontinental ballistic missile (ICBM), the Hwasong-17, on March 24, South Korea’s Joint Chiefs of Staff (JCS) said.

The missiles flew approximately 360 kilometers (224 miles), reaching an altitude of 90 kilometers and a maximum velocity of Mach 5, the JCS said. The United States and condemned the launch as a violation of U.N. bans on such tests, but the U.S. military said it did not pose an immediate threat to America or its allies.

Japanese Defense Minister Nobuo Kishi said the missiles flew about 350 kilometers (217 miles), to the maximum altitude of around 100 kilometers (62 miles), before landing outside Japan’s territorial waters.

“A series of missile launches when the invasion of Ukraine is taking place is unacceptable,” he told reporters, adding that Tokyo had lodged a protest against North Korea through its embassy in Beijing.

The launch was also the first since the inauguration this week of conservative South Korean President Yoon Suk-yeol, who has signalled a hard line against the North’s weapons development.

Yoon’s national security office issued a statement condemning the launch and saying it “deplored the duplicitous conduct” of firing ballistic missiles and ignoring the plight of its people in the middle of a COVID-19 outbreak.

But Yoon’s office said it would not link humanitarian aid to political differences with North Korea and the new president’s nominee as minister responsible for inter-Korean ties, told his confirmation hearing he would prepare humanitarian assistance for Pyongyang, including COVID-19 treatment, syringes, and other medical supplies.

Some analysts have suggested that such humanitarian assistance could create an opening to restart stalled diplomacy with North Korea.

However, a spokesperson for the White House National Security Council said the United States has no current plans to share vaccines with North Korea and that North Korea had repeatedly refused vaccine donations from the COVAX global vaccine sharing project.

The spokesperson said that while Washington continued to support international efforts aimed at the provision of critical humanitarian aid to the most vulnerable North Koreans, North Korea “continues to exploit its own citizens and divert resources from the country’s people to build up its unlawful nuclear and ballistic weapons programs.”

The official said Pyongyang had created significant barriers to the delivery of assistance by closing its borders and rejecting offers of international aid.

The latest launches come amid concerns that North Korea may be about to resume nuclear bomb testing suspended since 2017. U.S. and South Korean officials have said this could happen as early as this month.

U.S. President Joe Biden is due to visit South Korea and Japan next week and North Korea will be high on his agenda.

In its last weapons test on Saturday, the North used a submarine-launched ballistic missile, a type it has been aggressively developing in recent years.

In a statement, the U.S. military said it was closely consulting with its allies and partners over Thursday’s launch. “The missile launch highlights the destabilizing impact of the DPRK’s illicit weapons program,” it said.

The State Department also condemned the launch, while saying it remained committed to a diplomatic approach with North Korea and reiterating a call for Pyongyang to return to dialogue.