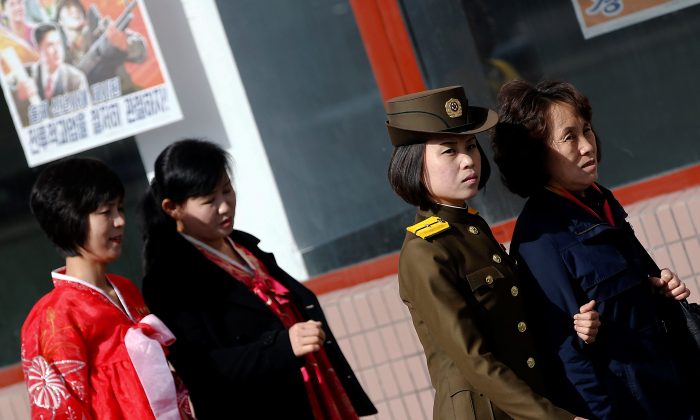 PYONGYANG/SEOUL—North Korea displayed what appeared to be new long-range and submarine-based missiles on the 105th birth anniversary of its founding father, Kim Il Sung, on Saturday, as a nuclear-powered U.S. aircraft carrier group steamed towards the region.

Missiles appeared to be the main theme of a giant military parade, with Kim’s grandson, leader Kim Jong Un, taking time to greet the commander of the Strategic Forces, the branch that oversees the missile arsenal.

A U.S. Navy attack with Tomahawk missiles on a Syrian airfield this month raised questions about U.S. President Donald Trump’s plans for reclusive North Korea, which has conducted several missile and nuclear tests in defiance of U.N. sanctions, and has regularly threatened to destroy the United States.

Kim Jong Un, looking relaxed in a dark suit and laughing with aides, oversaw the festivities on the “Day of the Sun” at Pyongyang’s main Kim Il Sung Square.

Goose-stepping soldiers and marching bands filled the square, next to the Taedonggang River that flows through Pyongyang, in the hazy spring sunshine, followed by tanks, multiple-launch rocket systems and other weapons.

Unlike at some previous parades attended by Kim, there did not appear to be a senior Chinese official in attendance. China is North Korea‘s lone major ally, but has spoken out against its missile and nuclear tests and has supported U.N. sanctions. China on Friday again called for talks to defuse the crisis.

Weapons analysts said they believed some of the missiles on display were new types of intercontinental ballistic missiles (ICBM).

The North has said it has developed and would launch a missile that can strike the mainland United States but officials and experts believe it is some time away from mastering all the necessary technology.

North Korea showed two new kinds of ICBM enclosed in canister launchers mounted on the back of trucks, suggesting Pyongyang was working towards a “new concept” of ICBM, said Melissa Hanham, a senior research associate at the U.S.-based Middlebury Institute of International Studies at Monterey, California.

“However, North Korea has a habit of showing off new concepts in parades before they ever test or launch them,” Hanham said.

“It is still early days for these missile designs.”

The Pukkuksong submarine-launched ballistic missiles (SLBM) were also on parade. It was the first time North Korea had shown the missiles, which have a range of more than 600 miles, at a military parade.

Displaying more than one of the missiles indicates North Korea is progressing with its plan to base a missile on a submarine, which are hard to detect, said Joshua Pollack, editor of the Washington-based Nonproliferation Review.

“It suggests a commitment to this program,” said Pollack. “Multiple SLBMs seems like a declaration of intent to advance the program.”

North Korea, still technically at war with the South after their 1950-53 conflict ended in a truce but not a treaty, has on occasion conducted missile or nuclear tests to coincide with big political events and often threatens the United States, South Korea, and Japan.

Choe Ryong Hae, a close aide to Kim Jong Un, addressed the packed square with a characteristically bellicose warning to the United States.

“If the United States wages reckless provocation against us, our revolutionary power will instantly counter with annihilating strike, and we will respond to full-out war with full-out war and to nuclear war with our style of nuclear strike warfare,” he said.

State news agency KCNA said the Trump administration’s “serious military hysteria” had reached a “dangerous phase which can no longer be overlooked”.

The United States has warned that a policy of “strategic patience” with North Korea is over. U.S. Vice President Mike Pence travels to South Korea on Sunday on a long-planned 10-day trip to Asia.

China has also stepped up economic pressure on North Korea. It banned all imports of North Korean coal on Feb. 26 under U.N. sanctions, cutting off the North‘s most important export product.

China’s national airline, Air China, weeks ago canceled some flights to Pyongyang due to poor demand but it has not suspended all flights there, it said on Friday, denying a report by Chinese state broadcaster CCTV that all flights run by the airline between the two cities were to be suspended.

China’s Global Times newspaper, which is published by the People’s Daily, the Communist Party’s official paper, said North Korea must have felt the shockwave from the 11-ton “mother of all bombs” dropped by U.S. forces on Islamic State-linked fighters in Afghanistan on Thursday.

“It would be nice if the bomb could frighten Pyongyang, but its actual impact may just be the opposite,” it said in an editorial.

With the men wearing pins adorned with photos of Kim Il Sung, and the women in brightly colored traditional dress, crowds lined up to bow to portraits of their state founder before touring an exhibition of photos and North Korean paintings.

KCNA was gushing in its praise of Kim Il Sung, recalling the time he met former U.S. president Jimmy Carter in 1994.

“Former U.S. President Jimmy Carter was so fascinated by his personality as to say that Kim Il Sung is greater than that George Washington, Thomas Jefferson and Abraham Lincoln put together, eulogizing him as the great sun god of human destiny.” it said.