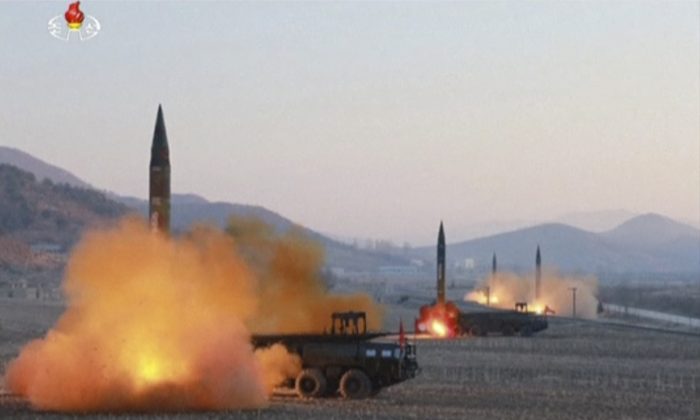 In this image made from video released by KRT North Korea launches four missiles in an undisclosed location North Korea on March 7, 2017. On Monday, North Korea fired four ballistic missiles in an apparent protest against ongoing U.S.-South Korean military drills that it views as an invasion rehearsal. (KRT via AP Video)
US News

North Korea Boosts Defenses on Coasts After US Bomber Flyby

North Korea has boosted defenses on its east coast, a South Korean lawmaker said on Tuesday, after Pyongyang said U.S. President Donald Trump had declared war and that it would shoot down U.S. bombers flying near the peninsula.

Tensions have escalated since reclusive North Korea conducted its sixth and most powerful nuclear test on Sept. 3. North Korean Foreign Minister Ri Yong Ho said on Monday that Trump’s Twitter comments that leader Kim Jong Un and Ri “won’t be around much longer” if they acted on their threats amounted to a declaration of war and that Pyongyang had the right to take countermeasures.

White House Press Secretary Sarah Sanders dismissed the claims by the North on Monday that the U.S. had declared war.

“We’ve not declared war on North Korea. And frankly, the suggestion of that is absurd,” Sanders said at a White House press briefing.

South Korean lawmaker Lee Cheol-uoo, briefed by the country’s spy agency, said North Korea was bolstering its defenses by moving aircraft to its east coast and taking other measures after U.S. bombers flew close to the Korean peninsula last weekend.

Lee said the United States appeared to have disclosed the flight route of the bombers intentionally because North Korea seemed to be unaware.

Ri, the foreign minister, said on Monday North Korea’s right to countermeasures included shooting down U.S. bombers “even when they are not inside the airspace border of our country.”

In Washington on Tuesday, the top U.S. military officer, Chairman of the Joint Chiefs of Staff General Joseph Dunford, said he had not seen a change in the military posture of North Korean forces despite the heightened rhetoric.

Dunford added that Pyongyang will have a nuclear-capable intercontinental ballistic missile “soon” and it was only a matter of a “very short time”.

Speaking at his Senate reappointment hearing, Dunford said “the military dimension today is in full support of the economic and diplomatic pressure campaign” that Secretary of State Rex Tillerson is leading on North Korea. Dunford made clear that military options are available to Trump if that pressure fails.

“You have seen unanimous United Nations Security Council resolutions passed that have increased the pressure, economic pressure and diplomatic pressure, on the North, and at the same time, we maintain the capability to deter North Korea’s most dangerous threats,” he told reporters in the Indian capital.

U.S. Air Force B-1B Lancer bombers escorted by fighter jets flew east of North Korea in a show of force after a heated exchange of rhetoric between Trump and Kim.

North Korea has been working to develop nuclear-tipped missiles capable of hitting the U.S. mainland, which Trump has said he will never allow.

The United States and South Korea are technically still at war with North Korea after the 1950-53 conflict ended in a truce and not a peace treaty.