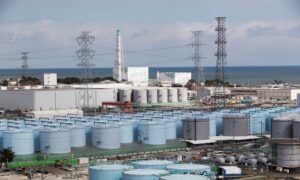 North Korea exploded 10 of its own military guard posts on the demilitarized zone (DMZ) bordering South Korea as part of the peace process between the two countries. The two Koreas are also being reconnected by a road across the border for the first time in 14 years.

The new cross-border road is entirely within the DMZ, the South Korean Defense Ministry said on Nov. 22, and is intended to be used for joint operations in 2019 to recover remains of soldiers and from the Korean War.

Recent footage and photos of North and South Korean soldiers shaking hands and working on the last stages of the new connecting road has also been released. The new road is 3 kilometers (1.8 mile) long and 12 meters (39 feet) wide, and is located at Arrowhead Ridge in Cheorwon County—a site of fierce battles in the Korean War.

“It is historically significant for the North and the South to open a new passage and jointly engage in operations to recover remains of war dead at the place which saw the worst battles during the war,” the ministry said, AFP reported.

North and South Korea have been divided since the Korean War ended in a ceasefire in 1953. The DMZ was established following the war. It is 160-mile (260-km) long and 2.5-mile (4-km) wide. The strip of land served as a buffer between the North and South. Despite its name, the DMZ is a heavily fortified border.

On Sept. 18, at an inter-Korean summit in Pyongyang between North Korean leader Kim Jong Un and South Korean President Moon Jae-in, the defence ministers of both countries agreed on a framework to reduce their military tensions. The destruction of several guard posts and the building of the connecting road followed.

The two countries also pledged as part of the agreement to create a maritime peace zone in the West Sea (Yellow Sea). As of Nov. 1, both sides have also stopped artillery and military drills close to the DMZ, and have established no-fly zones along the border. They will also remove bunkers and weapons from the border truce village of Panmunjom, AFP reported.

This followed earlier reconciliation efforts in a historic move by the two Korean leaders on April 27 when they met on the dividing line between the two countries, agreeing to work on a peace deal and the complete denuclearization of the North.

“President Trump should win the Nobel Peace Prize. What we need is only peace,” Moon told a meeting of senior secretaries, a South Korean official who briefed media said on April 30.

Both South Korean and Japanese officials have also credited Trump for the progress.

“We’re glad that the Korean Peninsula issue is starting to get resolved. To a great extent it was possible thanks to the personal engagement of President Trump, who opted for dialog instead of confrontation,” Putin said during a joint press conference on July 16 after his first one-on-one summit with Trump.

U.S. Secretary of State Mike Pompeo said on Nov. 20 that South Korea should not improve ties with North Korea faster than North Korea’s efforts to give up its nuclear weapons.

“We have made clear to the Republic of Korea that we do want to make sure that peace on the peninsula and the denuclearisation of North Korea aren’t lagging behind the increase in the amount of inter-relationship between the two Koreas,” he told a news briefing.

“We view them as tandem, as moving forward together,” Pompeo added. “We view them as important parallel processes, and that working group is designed to make sure they continue to remain that way.”