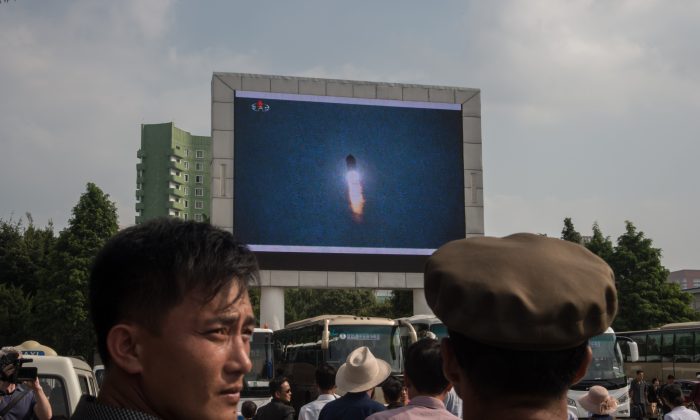 An increasingly isolated North Korea is raising concerns about the possibility of a pre-emptive nuclear strike by the United States.

The unusual statement was published by the North Korean regime’s Pyongyang Times newspaper on Nov. 14.

“The US can make a preemptive nuclear attack on the DPRK without a parliamentary approval in case Trump deems it necessary,” the North Korean state media said.

Mattis said that under Article 2 of the Constitution, the president has the authority to strike North Korea in the scenario of a direct attack by the communist regime or if an attack is imminent.

Tillerson testified on the importance for the United States to retain the ability to strike first as a deterrent.

“One of the strengths of the last 70 years has been the deterrence—the fact that no president, republican or democrat, has ever foresworn the first strike capability, that has served us for 70 years,” he said.

Sen. Chris Murphy (D-Conn.) had introduced a bill that would require congressional approval for any preemptive strike against North Korea.

However, the threat of a preemptive strike appears to have the desired effect on the rogue regime.

Clearly thrown off balance by the threat, the Pyongyang Times wrote, “no US administration has openly claimed a preemptive attack on the DPRK as now.”

The head of the U.S. military’s Pacific Command, Admiral Harry Harris, said on Nov. 16 that the strategy involves diplomatic actions with a credible military threat.

“While diplomacy must be the main effort with North Korea, it has to be diplomacy backed by credible military power,” said Harris.

In a separate article published by North Korean state media on the same day, it expressed worry about America increasing spending on and updating its military.

Under Trump, the United States has sharply increased its military spending. On Tuesday, the House passed a nearly $700 billion defense bill.

Among other things, the bill authorizes the acquisition of 90 F-35 Joint Strike Fighters and 24 Navy F/A-18 Super Hornets. It also authorizes 13 new warships.

North Korean media said Trump is creating a “ferocious war monster,” adding, “The Korean peninsula and the Asia-Pacific are teetering on the brink of nuclear war.”

The North Korean regime is known for its frequent threats of using nuclear weapons against the United States and its allies, Japan and South Korea.

However, under increased economic sanctions, and a credible military threat, it appears the North is faltering.

Multiple reports from within North Korea confirm that the economic sanctions are biting and that there’s a severe shortage of fuel supplies.

Trump rallied the support from a number of Asian nations, including China, during his 12-day Asia tour. China sent a special envoy to North Korea on Nov. 16, an action described by Trump as a “major move.”