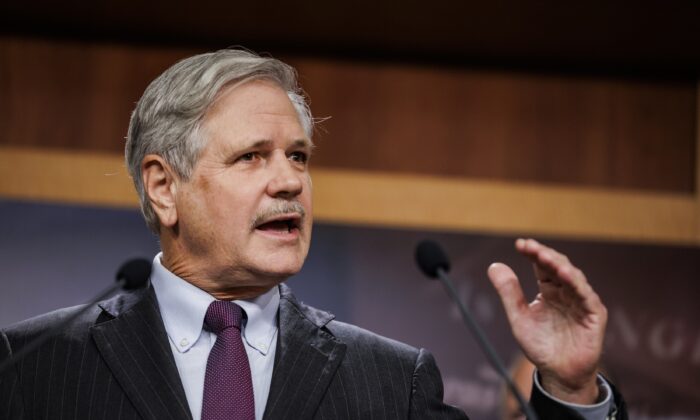 Sen. John Hoeven (R-N.D.) will face a primary challenge in the upcoming election after running unopposed in 2016.

North Dakota Rep. Rick Becker, 57, said in the video announcing his bid for Hoeven’s senate seat that he’s a conservative Republican who has helped approve laws protecting unborn babies, lowering taxes, and reforming the criminal justice system. Without mentioning his opponent, Becker said he’s “an outspoken critic of do-nothing politicians in the legislature and the Republican Party, especially over the runaway spending during the last decade both in North Dakota and in Washington.”

The nation needs “principled conservatives who will do what’s right regardless of whether it’s politically safe” in Washington, he said.

Hoeven’s campaign didn’t respond to a request for comment and hasn’t reacted to the challenge.

Becker, a plastic surgeon, announced in January that he was retiring from the state legislature. He was known, in part, for founding the Bastiat Caucus, which is made up of members who push for policies that limit government powers and ensure constitutional principles.

Becker was a gubernatorial candidate in 2016, but lost to current North Dakota Gov. Doug Burgum.

Hoeven, 64, easily won reelection in 2016, capturing more than 78 percent of the votes in the general election after running unopposed in the Republican primary.

Hoeven won all but 130 votes in the 2010 Republican primary and easily won the general election. He took a seat held for nearly two decades by former Sen. Byron Dorgan (D-N.D.).

Hoeven previously served as the governor of North Dakota.

Alaska candidate Kelly Tshibaka is taking on Sen. Lisa Murkowski (R-Alaska), who has long been unafraid to cross the aisle and vote with Democrats on a range of issues. Over the weekend, Murkowski was endorsed by Sen. Joe Manchin (D-W.Va.).

Sens. John Boozman (R-Ark.), James Lankford (R-Okla.), Mike Lee (R-Utah), and Mike Crapo (R-Idaho) are among the other Republicans being challenged from the right, while other Republican senators up for reelection are facing Democratic candidates hoping to flip seats.

The Senate is currently divided 50–50 between Republicans and Democrats or nominal independents. Democrats control the chamber because Vice President Kamala Harris, who also serves as president of the Senate, can cast tiebreaking votes.