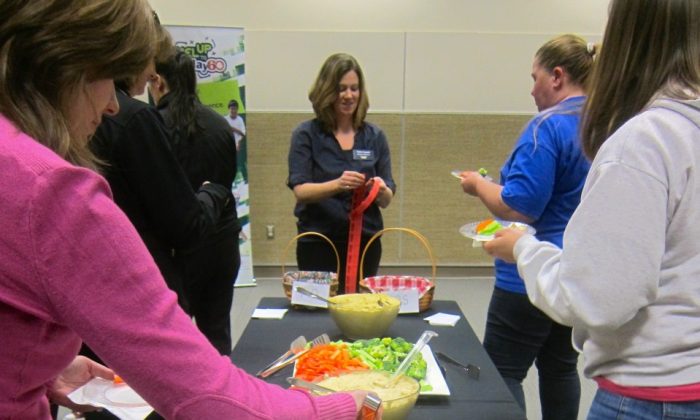 Dr. Vondell Clark spends his days helping people of all ages live better by eating healthy and living active lives. According to Clark, Americans eat a diet comprised mostly of sugar and fat and it is a real problem for our school kids.

“If we can come together, we can solve so much,” Clark said.

Clark is the vice chair of Eat Smart, Move More in North Carolina, an organization that works with schools and communities to make healthy living easier.

Clementine Buford, a school nurse and past president of the North Carolina School Nurse Association, said that by midmorning the children start arriving at her office saying, “I’m hungry,” “I don’t feel good,” or “I have a headache.”

“What the child is missing today is breakfast,” she said, speaking as a panelist at the North Caroline Parent Teacher Association’s (NCPTA) Emerging Leaders Conference on Feb. 9, part of the Team Up for Healthy Learning initiative.

Buford said that it is often because of hunger and poor nutrition that children end up at the nurse’s office or the principle’s office. According to Buford, breakfast jump-starts the day and missing it can make children irritable and unable to focus, leading to health and behavioral issues.

The circumstances that create an unhealthy diet or an unhealthy lifestyle are complex, but Clark is motivated to do everything he can personally to help children create healthy habits. Examining his motivation, Clark recalled an experiment where two people having a conversation were placed in different rooms, and one person pretended to have a seizure.

“About 98 percent of the time, the other person stepped up to do what is right,” by helping the person in need, he said. But when they increased the number of people in the room, the reactions became less predictable. Participants hesitated and started asking each other, “Do you want to do something?”

The study concluded that group decision making was complex, it became difficult for participants to make the decision to help someone in need. Clark sees just this kind of group indecision as part of the reason the needs of children are not being met. “It’s a little bit frustrating,” Clark said.

Enough to Go Around

According to the National School Lunch Program fact sheet, there were more than 31.8 million children fed through the federally assisted meal program every day in 2011.

“A lot of kids, the only food they do have is the two meals they have at school,” Szaloky said.

Because so many children in area schools are at risk of being hungry the PTA has had to come up with some creative ways to get healthy food into the hands of the kids who need it most. This past year, the PTA started a food-recycling program at Myrtle Grove Middle School called the “Gator-Aid,” after the school mascot, an alligator.

According to Szaloky, it took just two days for the children to learn to recycle their untouched food. “Our social worker makes sure we stuff the pockets of the backpacks of the kids that need it the rest of the day,” she said.

The school also collects food for the North Carolina Food Bank’s Weekend Power Pack Program. In return the students at the school that risk serious hunger over the weekends get the backpacks stuffed with food from the program on Friday afternoon.

According to the food bank’s website, the program started in 2005 with just 30 children in one school.
“As of 2010, the program supports 31 sites providing 141,550 backpacks and logging 13,586 hours of volunteer support,” the website states.