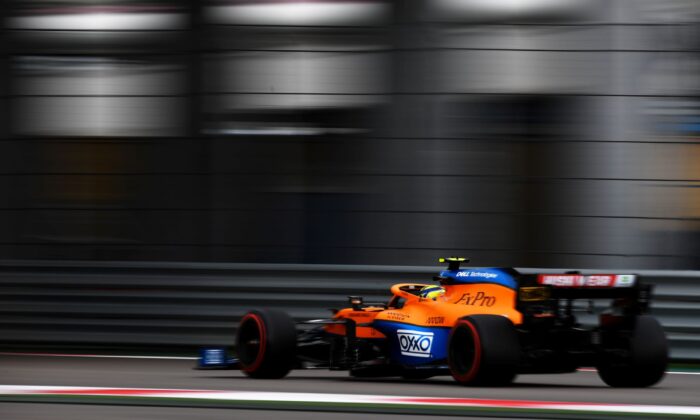 Ferrari’s Carlos Sainz joined the Briton on the front row in Sochi with Williams’ George Russell, Hamilton’s team mate from next season, completing a top three that nobody would have predicted.

Hamilton, who had been on provisional pole before everyone switched to slicks on a drying track, qualified fourth for Mercedes after a brush with the pit lane wall damaged his front wing at a key moment.

He can still expect to take the championship lead back from Red Bull rival Max Verstappen on Sunday with the 23-year-old Dutch driver starting at the back due to engine penalties. Mercedes have never been beaten in Sochi.

Norris, 21, whooped in delight at what he hoped would be the first of many poles.

“It feels amazing….we made the decision in the end to go slicks. you never think you will get pole until you get it and now I’ve managed to do it. Extremely happy and big thanks to the team. They’ve done an amazing job,” said the youngster.

“It was tough. I am going to make myself sound good but it was tricky…The lap before I was two seconds down and I wasn’t very confident we were going to improve on the previous lap…I risked quite a bit and it paid off. I’m a happy boy.”

McLaren won the previous Italian Grand Prix at Monza in a one-two finish, and Australian winner Daniel Ricciardo qualified fifth in Sochi ahead of Spaniard Fernando Alonso in sixth for Alpine.

Hamilton, whose team mate Valtteri Bottas qualified only seventh, complained he could not keep heat in the tyres when he returned to the track and he spun on his final flying lap.

“It was just a mistake from myself. I’m incredibly disappointed in myself,” said a deflated Hamilton of his pit lane prang.

“Up until then I was in the groove, I was really in the zone.

“I’m really sorry for all the team that are here and back at the factory because obviously that’s not what you expect from a champion. It is what it is and I will do my best tomorrow to try and rectify it.”

Verstappen, five points clear of Hamilton after 14 races, made only a brief appearance in qualifying with nothing to achieve.

Mercedes have won every grand prix in Sochi since the first in 2014 and Hamilton can still hope for a record-extending 100th win on Sunday.