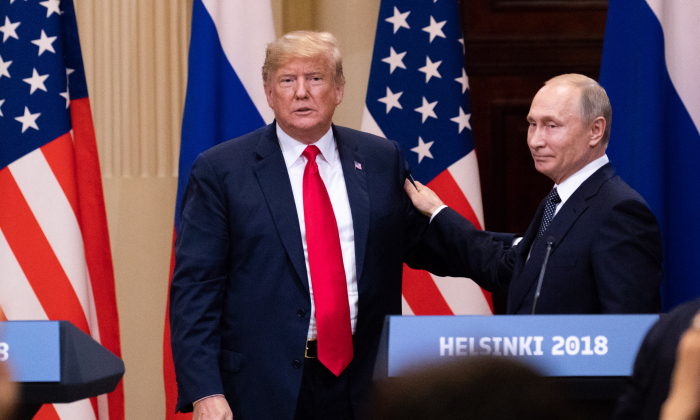 Russian President Vladimir Putin assured U.S. President Donald Trump in Helsinki on July 16 that Russia will not cut Ukraine out of a lucrative gas transit deal once its contentious Nord Stream 2 pipeline is complete.

The two leaders met one-on-one for nearly two hours on July 16. Putin told reporters that Trump brought up Nord Stream 2 during the meeting. The project, which is under construction, is an expansion of the world’s longest undersea pipeline, which links Russia and Germany.

Despite positioning itself as a neutral business venture, Nord Stream 2 has become an intensely political project. The State Department views it as a threat to the national security of its allies in Europe, a way to circumvent an existing pipeline that runs through Ukraine, and a threat to Kiev through the loss of a major income source.

“The president voiced his concerns about the possibility of disappearance of transit through Ukraine and I reassured Mr. President that Russia stands ready to maintain this transit,” Putin said. “Moreover, we stand ready to extend this transit contract that is about to expire next year if the dispute between the economic entities will be settled in the Stockholm arbitration court.”

The two entities Putin referred to are Russia’s Gazprom and Ukraine’s Naftogaz. The two companies have been locked in a legal battle since 2014 over transit contracts and payments. A Swedish court’s decision on the dispute is expected to set the course of the relationship between the two companies. Gazprom would face hefty fines if the Stockholm court rules in favor of Naftogaz.

Gazprom owns a majority stake in Nord Stream 2, which is scheduled for completion by next year. Roughly half of the project is financed by a group of German, Austrian, French, Dutch, and British companies in a joint venture with Gazprom.

During the NATO summit earlier this month, Trump criticized Germany for working on Nord Stream 2 with Russia. The president said it was “sad” that Berlin is buying energy from Moscow while depending on Washington to play the role of a military deterrent against Russia in Europe.

“Well, I have to say, I think it’s very sad when Germany makes a massive oil and gas deal with Russia, where you’re supposed to be guarding against Russia, and Germany goes out and pays billions and billions of dollars a year to Russia,” Trump said.

The gas dispute between Kiev and Moscow can be traced back to the beginning of the conflict between the two countries. Then-Ukrainian President Viktor Yanukovych backed out of a trade deal with the European Union in favor of a natural gas deal with Gazprom. The resulting protests by Ukrainians led to Yanukovich’s ouster and replacement with Russia hawk Arseniy Yatsenyuk.

U.S.–Russia relations deteriorated as the conflict in Ukraine persisted. Russian-backed separatists still hold a large swath of Ukraine and continue to battle Ukrainian forces. The war has claimed 8,000 lives to date. American and European officials see Nord Stream 2 as another way for Russia to undermine Ukraine.

Trump told reporters in Finland that relations with Russia were at an all-time low leading up to the summit but that the meeting with Putin has changed all that.

“During the tensions of the Cold War, the U.S. and Russia were able to maintain a strong dialogue. Our relationship has never been worse than it is now,” Trump told reporters on July 16.

“That’s changed as of four hours ago. Nothing would be easier, politically, than to refuse to engage, but that would not accomplish anything. I cannot make decisions on foreign policy based on pundits’ opinion.”

If allowed to proceed, Nord Stream 2 would double the capacity of the current Nord Stream pipeline to 3.9 trillion cubic feet of natural gas per year by 2019. That would allow Russia to concentrate 80 percent of its gas supply on a single route—”a potential chokepoint that would significantly increase Europe’s vulnerability to a supply disruption,” according to Mary Burce Warlick, the acting special envoy for international energy affairs at the State Department.

Trump pointed out that the United States is looking to compete with Russia in the gas market using liquid natural gas shipments.

Putin noted that the two countries can work together on regulating the international energy market, given that both nations are leading producers of oil and gas.

“We do have space for cooperation here,” Putin said.