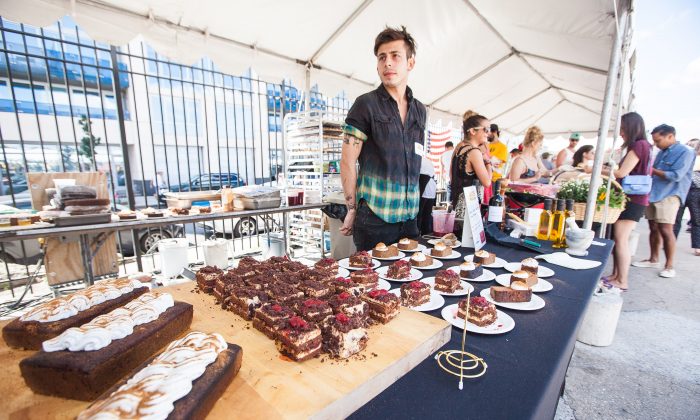 NEW YORK—Enjoying the cuisine of some top North Brooklyn restaurants, Carter Swope was satisfied, praising the selection in a conversation with her friend Caroline Wiest.

Their decision to pay $25 for the experience was worth it because they knew the proceeds would help the hip neighborhood get a new community center.

On a sunny Sunday, Taste Williamsburg Greenpoint provided samples from dozens of the neighborhoods’ best restaurants, bars, breweries, and wineries, in a breezy area of the East River State Park, several blocks north of the Williamsburg Bridge.

It started in 2010 and continues annually to raise money for the Northside Town Hall, a new community center that may, or may not open in the neighborhood.

The center should fill the empty walls of the former Engine 212 firehouse at 134 Wythe Avenue in Williamsburg—the People’s Firehouse. Dating back almost 150 years, it is a symbol of the community’s rich, and often successful, history of activism.

In 1975, during a severe debt crisis, the city tried to shut the firehouse down. But residents wouldn’t allow it, gathering into crowds to protect it. For 16 months, some took shifts squatting inside until the city gave in and restored the facility, but with limited service to the community.

It took another 15 years of activism to bring back the original level of service.

Several years later, in 2003, the Bloomberg administration cut the budget and closed the firehouse indefinitely.

Despite minimally paid staff, it cost tens, even hundreds of thousands of dollars a year just to keep the new nonprofit functioning—putting it in a Catch 22 situation.

“It’s a little bit on a treadmill,” said Felice Kirby, a board member of the Northside Town Hall and an owner of the local Teddy’s Bar and Grill. “We’re constantly needing to fundraise, because we’re spending the money to run the nonprofit.”

Things are better now as some local businesses and corporate sponsors chipped in, according to Joy Glidden from NAG. If they raise $200,000 more by the end of the year, they can move forward with the project, she said. So far they are optimistic.

Glidden said a radio station is also in consideration, as the firehouse should be a “crier” of the community.

Judging from a flattering turnout and general praises of the food by the crowd, the fifth Taste Williamsburg Greenpoint may bring the center quite a bit closer to the $200,000 goal.

“They made that today,” commented Derek Wheeler from Arizona, giving the event a rating of “excellent.” His colleague Drew Downing from Alabama called it a highlight of their business trip.