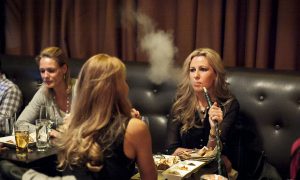 One Hookah Smoking Session Delivers 25 Times the Tar of a Single Cigarette: Study
0 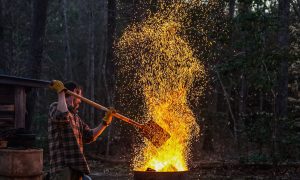 Taming of the Smoke
0
NY News

Dozens of bar owners that offer the water pipes gathered on the steps of New York City Hall on Oct. 22 to ask officials to give them more time to apply for permits. They want to renegotiate the rules, which they say are unfair and will cause many businesses to close.

Smoke from both tobacco-burning and non-tobacco hookahs contains dangerous chemicals such as emissions from burning charcoal.

The main criterion that makes businesses eligible for the new permit is that they must have consistently earned at least half of their revenue from the on-site sale of non-tobacco smoking products since Oct. 16, 2017. The application period was from April 16 to Oct. 22 this year.

Elvis Silverio, president of the New York Latino Restaurant, Bar and Lounge Owners Association, said at the press conference that hundreds of minority-owned and small businesses cannot meet the main requirement as it is written. The association, which organized the event, represents over 400 restaurants and bars citywide.

“We are here to make a point and take it across the city to understand that we are here to stay in business,” Silverio said.

He said businesses are willing to comply as long as regulations are fair, but hundreds of small businesses that do not qualify for a permit are expected to close.

“Pushing [small businesses] to remove non-tobacco hookah products from menus, so that only a handful of establishments can monetize from an entire market, is not a fair competition practice,” Silverio said in a press release.

Leo Ramirez, owner of Parrilla Latina Steakhouse in the Bronx, echoed Silverio, saying the regulation will reduce the amount of revenue these businesses will earn.

“If you take 15 or 20 percent of the money that the business make weekly, it’s going to be a problem,” he said.

In response, the New York Health Department said in a statement to The Epoch Times that the hookah establishments have had six months to apply for the new permit.

“The Health Department has done extensive outreach to bars and restaurants to inform them of the permit, including, most recently, an information session with the Latino Restaurant Bar and Lounge Owners Association [on Oct. 18],” the statement said.

The department said they had sent notices to more than 400 establishments and had tried to reach business owners through ads, information sessions, and social media. So far, 170 establishments have applied for the permit.

The new regulations also ban new hookah bars from opening, while requiring existing establishments to obtain a permit, post warning signs, and raise the minimum age to buy hookah from 18 to 21.

Hookahs are water pipes used to smoke flavored tobacco or herbs. The tobacco and smoke from the hookah can contain toxic agents known to cause lung, bladder, and oral cancers as well as clog the arteries and cause heart disease, according to the Centers for Disease Control and Prevention.

The health department said that even without tobacco, smoke from hookah can increase the risk of heart and lung disease, cancer and early death, both for smokers and nonsmokers who breathe in secondhand smoke.