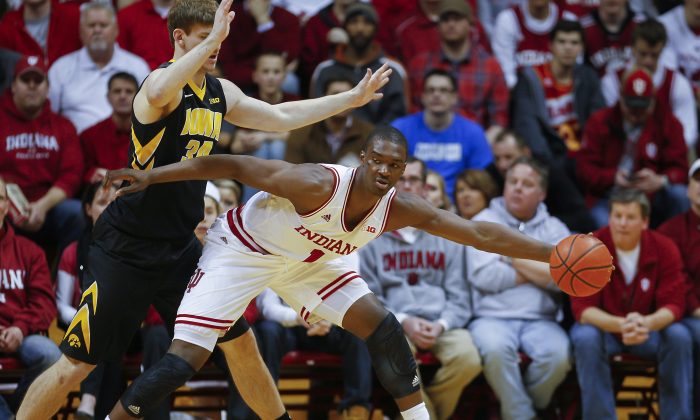 Noah Vonleh #1 of the Indiana Hoosiers stretches to pull in the ball as Adam Woodbury #34 of the Iowa Hawkeyes guards at Assembly Hall on February 27, 2014 in Bloomington, Indiana. Indiana defeated Iowa 93-86. (Michael Hickey/Getty Images)
NBA

Former Indiana University forward Noah Vonleh is projected to be the fourth pick at best and do no worse than being the eighth pick.

Although mainly an inside player, the 6’10, 240 pound forward also has pretty decent perimeter skills.

The Haverhill, Massachusetts native has been criticized for not being able to exert his authority on the court, but there’s hope that in time and with more playing time, Vonleh will become a dominant player.

NEW YORK (AP) — Andrew Wiggins and Jabari Parker aren’t NBA players yet and they are already learning their first lesson.

This is LeBron James’ league and they will just be playing in it.

A night before they could be the first two selections in what appears to be a deep NBA draft, Wiggins, Parker and the rest of the class of 2014 were sharing the spotlight with James, whose decision to opt out of his contract and become a free agent Tuesday still had the league shaking a day later.

Carmelo Anthony has the same plan as James, and right now they are a 1-2 that Wiggins and Parker can’t match.

The Cleveland Cavaliers have the No. 1 selection for a second straight year, and either Wiggins or Parker would be an improvement over Anthony Bennett, who had a forgettable rookie season. Wiggins, like Bennett, is Canadian, and would love to be called first Thursday.

When his Jayhawks teammate, Joel Embiid, broke his foot, it strengthened the chances of Wiggins going first. Or perhaps it could be Parker, the versatile freshman from Duke.

Or, as Parker realizes, perhaps the Cavs will decide a trade is the best option.

A deal with Minnesota for Kevin Love would bring the Cavaliers an All-Star and might make a return to Cleveland more appealing for James. So Parker said he would understand if the Cavs dealt the pick.

Perhaps some other team with aspirations of James or Anthony will shake up the draft by making a move that gets them ready for July 1.

“You never know what they want to do,” Parker said, “whether organizations want to trade picks to create a little bit more money. So you never know in this business.”

Milwaukee picks second, followed by Philadelphia, Orlando, Utah and a couple teams not used to picking this high: Boston and the Los Angeles Lakers.

Here are five things to watch at Barclays Center in Brooklyn:

“And it’s crazy because everybody knows from the top on through 15, the lottery, that it’s a lot of talented guys in there and it’s deep,” Smart said. “But not only that, you can go down to the second round and late first, it’s still a lot of great talent in those bottom rankings. So this class is probably, I think is one of the better draft classes to ever have and it shows.”

HEAT HELP?: Miami needs a roster upgrade, and Shabazz Napier of national champion Connecticut was aware of an ESPN report that the Heat have targeted him as a player who can provide it. The point guard seemed flattered but didn’t know if anything would come of it.

“I definitely worked out with the Miami Heat, so at the end of the day I can’t do nothing besides just get ready to figure out who’s going to draft me,” he said.

PARKER’S PHYSIQUE: If the Cavs pass on Parker, he doesn’t think it should be because of concerns about his fitness, disputing a reported poor workout for Cleveland.

“If you put a treadmill right here, we can have a contest and we all can judge that,” said the 6-foot-8, 235-pound forward, acknowledging surprise at the criticism.

“I’m not no couch potato. I’m not going to flip the channels. I love to play basketball and you can find me playing that almost every day.”

EMBIID’S, EXUM’S ENTRANCES: Though surgery to repair a stress fracture in his right foot on top of a late-season back injury appear to have ended Embiid’s hopes of going No. 1, the center from Kansas might be hard to pass up by one of the multiple-pick teams because of his potential. Dante Exum, the point guard from Australia, could go right around the same time in the top five.