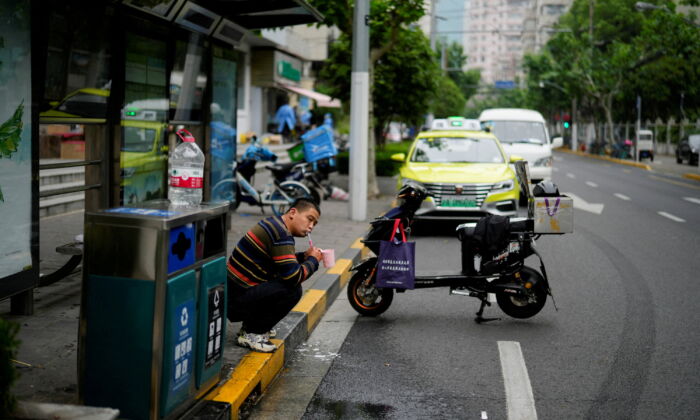 A delivery worker, who says he is living at a bus stop because he has been unable to return home for weeks due to the lockdown, brushes his teeth on a street in Shanghai on May 12, 2022. (Aly Song/Reuters)
Social Issues

No Work and Nowhere to Live: A Rural Migrant’s Ordeal in Locked-Down Shanghai

BEIJING —When Shanghai began its draconian COVID-19 lockdown two months ago, the French restaurant where Sun Wu waited tables closed and the 22-year-old, like countless other rural migrants, lost his job.

To make ends meet, Sun helped sort deliveries for residents under lockdown, earning 250 yuan ($38) a day and moving from a dormitory to live in the warehouse where he worked as required by COVID-19 rules.

Three weeks in, however, he had to leave the warehouse. His girlfriend, a migrant worker who had staffed the front desk at the same restaurant, needed urgent medical care.

With ambulance services stretched, Sun paid a delivery van driver 500 yuan ($74) to take them to a hospital on April 25 and she had surgery to remove a stomach cyst that night.

He stayed by her side until she was discharged on May 6. He bought her flowers and took her to her dormitory.

But Sun had nowhere to go.

The warehouse could not take him back due to strict COVID rules and his dorm lacked the space to isolate him as required. With train services suspended, he could not return to Dali, his hometown 3,000 kilometers (1,864) away in southwestern Yunnan Province.

The Chinese regime’s uncompromising “zero COVID” policies have battered China’s economy. Many of Shanghai’s 25 million residents complain about lost income, difficulties sourcing food, and mental stress. But migrant workers, unable to work from home or earn steady pay, have it much worse.

More than 290 million people from China’s vast countryside are migrant workers, drawn to coastal mega-cities in particular for work in factories, construction, restaurants, and other low-skilled jobs. Largely paid by the hour or day and without stable contracts, some can earn over 10,000 yuan ($1,493) in a good month but most pocket much less.

Their cheap labour has helped turn cities like Shanghai and Shenzhen into bastions of Chinese prosperity.

But lockdowns have thrust many into precarious situations, laying bare deep veins of inequality in Chinese society.

Their plight has garnered sympathy as stories like Sun’s go viral but with so much broad suffering amid the lockdown, calls for action to help migrant workers specifically have been few and far between.

As migrant workers often do, Sun had to improvise.

Grabbing his bicycle from a parking lot, he pedaled on Shanghai’s deserted roads past swank office towers to find a place to pitch a small tent he and his girlfriend had bought for traveling.

“My girlfriend did not cry at all in the hospital,” Sun said. “That night, I left her crying.”

That first night he found a patch of grass near a subway stop. The second night was a park; then a closed shopping mall; then a covered pedestrian bridge. Security kept shooing him away.

By day, he ate food cooked by his girlfriend as they chatted through gaps in the wall of her compound.

While cycling, Sun said he spotted “hundreds” of other homeless migrants.

Even if not homeless, many migrant workers have been stuck in crowded dorms or spent their nights sleeping at the factories or construction sites where they work. Truckers have spent days on highways, unable to drive through cities without doing quarantine.

“Once again, migrant workers are treated as cheap and disposable,” said Diana Fu, an expert on Chinese politics and labor at the University of Toronto.

It rained heavily the seventh night Sun spent on the streets. Not knowing what to do, he called the police for help.

An officer “told me to figure it out,” Sun said.

Shanghai police and the Shanghai authorities did not respond to Reuters requests for comment. Shanghai’s government said in late April companies would be guided to “care for migrant workers.”

“I have slept in parks, slept in plazas, seen Lujiazui at 3 a.m., and fed stray cats who were homeless like me,” he wrote in a May 12 post on the Weibo social media platform, referring to Shanghai’s financial district.

“I just want to find a place where I can stay and eat.”

The post was shared widely, drawing outrage at the lack of support mechanisms for migrants—a problem that stems from China’s “hukou,” or residence registration system designed in the 1950s.

Without a hukou in the cities where they work, migrant workers are often denied access to education, healthcare, and other services.

While Sun may have gathered sympathy, the authorities are thought to be more concerned with urban youth unemployment. Many migrant workers haven’t necessarily lost their jobs due to lockdowns, just most or all of their income.

The unemployment rate for migrant workers is 6.6 percent, only a little higher than the overall jobless rate. In contrast, the rate for urban youth has shot up to 18.2 percent, its highest on record, as corporate hiring withers amid the pandemic and regulatory crackdowns on the private education, tech, and other sectors.

The day after Sun’s viral Weibo post, another police officer called him. He was sent to a quarantine centre, where he shared a bigger tent with another migrant worker.

Shanghai remains largely under lockdown, but some trains are running again. On Thursday, Sun and his girlfriend took one to Taizhou, 500 kilometers (311 miles) south, where he has family.

They will quarantine for two weeks, then wait for Shanghai to return to normal. The city has flagged its plans to reopen from June although how extensively and quickly that will happen is still unclear.

“This nightmare may end,” Sun said. “And then a new one will come.”