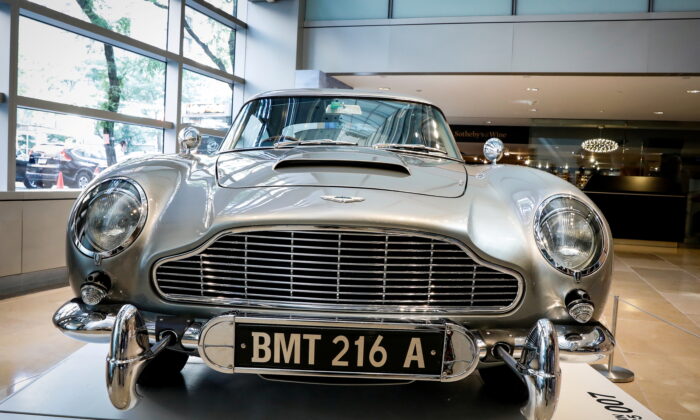 No Time for the Battery to Die: Bond’s Aston Martin Goes Electric

SILVERSTONE, England—Daniel Craig may be saying goodbye as James Bond, but his iconic Aston Martin is about to be given a new lease of life, for an ultra-cool $1 million.

Bond actually drove a DB5, which features again in the latest Bond movie, “No Time To Die.” But the DB6 is regarded by many as the epitome of British motoring style since it was first unveiled in 1965.

In a modern twist, the DB5 and DB6 are now being retrofitted to reappear in limited numbers as electric cars.

“For the women and men of tomorrow this, electrified, is what you should be driving,” said David Lorenz, CEO and founder of Lunaz, which specializes in making classic cars electric, at the wheel of a DB6.

“You’ve got the aesthetic beauty which you will never get in a modern vehicle yet the aesthetics can now be combined with a modern powertrain,” Lorenz said.

Lunaz, based near Silverstone, home of the British Grand Prix, is producing limited numbers of an electric DB6.

The company was founded, Lorenz said, to take upcycling to a whole new level and answer a tricky question—when internal combustion engines are banned, what are we going to do with the two billion vehicles already on the roads?

“I want to preserve these vehicles for future generations to come. My daughter is three years old. When she’s of driving age she’ll be driving electric cars and I want her to enjoy vehicles like this,” Lorenz said.

Technological upgrades include the latest brakes, suspension, and steering along with air conditioning and electronic infotainment systems.

The electric powertrains give the car a range of 255 miles.

But what would Bond say when his beloved DB5 no longer makes that throaty roar?

“Bond has always been about modern technology,” said Lorenz.

“Q would have loved to hand over the keys to an electrified Aston Martin. It suits Bond to the tee,” said Lorenz.

Lunez already electrifies a number of prestige cars from the bygone days of motoring, including Rolls-Royce, Bentley, and Jaguar sportscar models. They will soon offer limited build-slots for the Aston Martin DB4 as well as Bond’s iconic DB5, which achieved pop-culture status following the 1964 release of “Goldfinger.” Prices are given upon application but are expected to exceed $1 million, with the first deliveries expected in the third quarter of 2023.

While Lunez is hoping to corner the market in retrofitting classic cars, the race to electrify is well and truly on for all modern supercar makers. These include Ferrari with their first electric supercar expected in 2025, while Rolls-Royce last week teased their first fully electric car, called ‘Spectre’; coincidentally the same name as the shadowy crime organization of the James Bond stories.

By Stuart and McDill