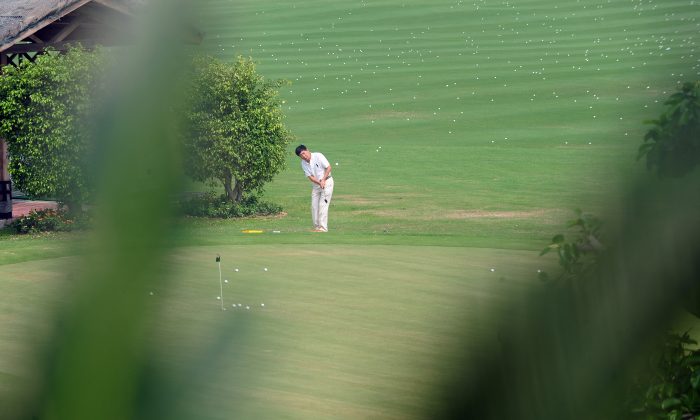 A golfer practices his chip shot at a course in Sanya on Oct. 25, 2009. On April 12, 2016, the Chinese Communist Party's anti-corruption agency said that golf as a sport is “neither right nor wrong." (FREDERIC J. BROWN/AFP/Getty Images)
China

A recent article by the Chinese Communist Party’s internal disciplinary body that touched on corruption and golf has been widely misinterpreted as the Party removing a long-time ban on the forbidden game.

Golf is “only a sport” and is “neither right nor wrong,” declared Discipline Inspection and Supervision News, the official newspaper of the Party’s anti-corruption agency in a report published April 12. The statement was made in the context of explaining article 87 of the Party regulations, which forbids cadres from owning sports club or golf membership cards that were obtained by dishonest means.

The anti-corruption agency’s report was taken by several news outlets to be indicative that playing golf, a game that Chairman Mao derided as the “sport for millionaires,” is now legal in China.

“China’s official war on golf has finally come to an end,” opened Quartz in its report, citing the state-run China Daily on the issue. China Daily wrote that it was “ok” for Party cadres to play golf “if they pay out of their own pockets” on the basis that the anti-corruption agency had acknowledged that “playing golf is not a wrongdoing” (the original Chinese wording was “neither right nor wrong.”) Meanwhile, The Guardian noted that “the Communist party of China has decreed” that “golf is no longer a crime.”

But the anti-corruption agency’s report only sought to explain the nuances of a piece of Party regulation, not confirm or affirm the legality of golf in China. In fact, the piece is explicitly titled: “Golf is neither good or bad, but owning illegal memberships is wrong.”

Dan Washburn, the leading authority on golf in China and author of “The Forbidden Game: Golf and the Chinese Dream,” told the Washington Post: “As is common in China, the regulation’s language does seem vague, perhaps purposefully so.”

“But the simple fact remains: No Chinese government official should be able to afford to play golf in the first place,” Washburn added.

Golf is still very much a game for the wealthy in today’s China. A round of golf costs more than $150 on average, putting it out of range for a regular Chinese worker in the private sector making about $8,000 annually in 2013, according to China’s National Bureau of Statistics.

Washburn thinks that the Party felt a need to clarify the status of golf in China because the sport would be included in the upcoming Olympics in Brazil. “But with China, you never know,” he told Washington Post.

The legal status of golf in the People’s Republic was only clear in the first decades of communist rule. Mao outlawed the sport in 1949, but after the ban was lifted in 1984 as part of former Party paramount Deng Xiaoping’s economic reforms, golf was tolerated in a semi-official capacity.

Golf came under the spotlight again after Party leader Xi Jinping launched an anti-corruption campaign in 2013. Several purged officials were found to have abused public or private company funds to indulge in the elite sport. In March 2015, the state-run Xinhua News Agency announced the closure of 66 illegally constructed golf courses.

Given the on-going anti-corruption drive, Party cadres might not be too keen to hit the golf courses even if the corruption inspectors have indeed given their tacit consent.

In the end, questions of formal legality in China matter a lot less than the political mood. None of the laws about golf in China have changed—it wasn’t changed from illegal to legal—but the Party is reminding everyone that it’s watching closely.