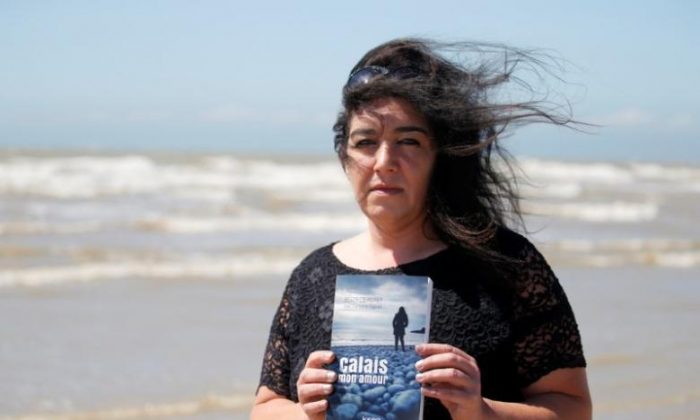 Beatrice Huret poses with her book titled "Calais Mon Amour" as she walks on the beach of Dannes near Boulogne-sur-Mer, on the northern French coast, France on June 15, 2017. (REUTERS/Pascal Rossignol)
Europe

No Sentence for French Woman Who Smuggled Her Migrant Sweetheart

A former supporter of France’s anti-immigrant National Front party who fell in love with a migrant was found guilty on Tuesday (June 27) of trafficking migrants across the English Channel but received no sentence at a court in Boulougne-sur-Mer in the north of the country.

Beatrice Huret, a former nursing aide who voted and even campaigned for the National Front, met and fell in love with Mokhtar, a teacher who fled Iran and ended up in Calais.

Speaking to reporters after the verdict was delivered and escaping a possible sentence of ten years in jail, Huret said it was a sacrifice she had been willing to make but that she was “relieved” with the result and that she would not commit the same act again.

Mokhtar, who wanted his family name withheld because he feared jeopardising his situation, now lives in England on the opposite side of the sea from Calais, the French port city from which thousands like him have sought to reach Britain, many without success.

He crossed the English Channel in a small boat he bought for 1,000 euros ($1,115) and which Huret helped him choose, setting out with two others from the village of Dannes about 50 km south of Calais and a similar distance from the shores of England.