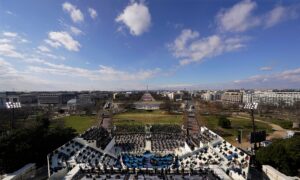 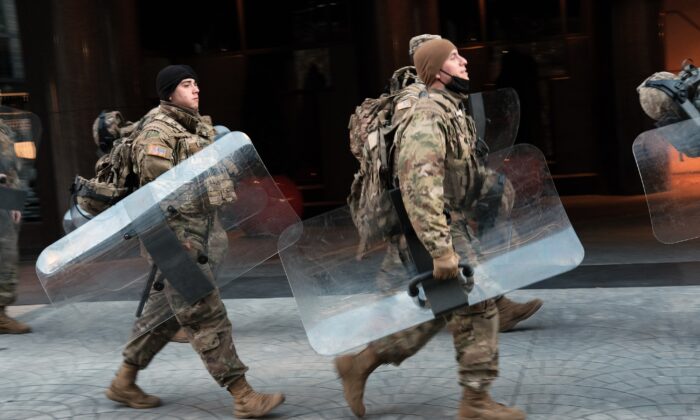 Members of the National Guard walk through the streets of Washington on Jan. 20, 2021. (Spencer Platt/Getty Images)
US News

The approximately 25,000 National Guard members in Washington to help protect President Joe Biden’s inauguration didn’t have to deal with any security problems, a spokesman said Jan. 21.

“There were no reported security incidents involving the National Guard on duty yesterday for inauguration support,” Maj. Matt Murphy told The Epoch Times via email.

Guard personnel were deployed to the nation’s capital in recent days to assist Metropolitan Police Department (MPD) officers and other law enforcement officials in securing the city following the breach of the U.S. Capitol on Jan. 6.

Fencing and barriers were erected around an area stretching 4.6 miles, with a focus on the Capitol building and other key government buildings. No sizeable protests appeared to take place; conservative leaders had encouraged people to stay home.

The U.S. Capitol Police told The Epoch Times via email that no arrests were made on Jan. 20. MPD arrest data showed it made no arrests that day.

The Secret Service made three arrests: two for unregistered ammunition and one for possession of a BB gun.

A National Guard spokeswoman told The Epoch Times via email that personnel were deployed “at the request of federal agencies and will stay as long as we are needed to meet their requirements.”

“If we have excess capability and capacity, we want to get those National Guard Soldiers and Airmen back home to their families and employers as soon as we can,” she said.

In a statement, Army Gen. Daniel Hokanson, chief of the National Guard, said: “Upon completion of the inauguration, we will continue to support federal law enforcement as requested. Our Guard members will return home as soon as conditions permit.”

Christopher Rodriguez, director of the Homeland Security and Emergency Agency, told reporters that all Guard personnel are heading home but that the city has requested that the D.C. National Guard stay activated until Jan. 30 for “traffic management and crowd control.”

Officials are evaluating whether intelligence from federal partners “would suggest that we need more presence,” Mayor Muriel Bowser, a Democrat, said, adding that she directed Rodriguez “to begin working with our partners on a[n] enhanced posture to deal with the threat of white extremism and any other threat to our city.”

“Let’s be clear, the threat of right-wing extremism is here, right? And we saw it on Jan. 6. And it will continue to be a persistent and real threat to the District of Columbia and to and to our region as well,” Rodriguez said, referring to the breach of the Capitol by a group that included supporters of President Donald Trump and left-wing activists.