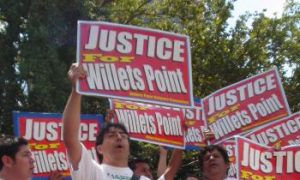 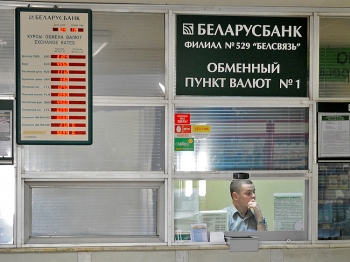 A bank worker sits inside an exchange office in Minsk, on April 27, 2011. Belarus has struggled through a deepening fiscal crisis which began last year when Russia raised the price it charges for energy. (Viktor Drachew/Getty Images)
Europe

No End In Sight for Belarus’s Economic Nose Dive

By Andrey Volkov
Print
Belarus has been in an economic tailspin since last December’s presidential election and the brutal suppression that followed of anyone questioning Alexander Lukashenko's landslide win of a fourth term. The fall has accelerated since the April 11 subway bombing that Lukashenko blamed on forces trying to "destabilize" the country, Europe’s last communist state.

With the devaluation of the county’s ruble, beginning in March, worried Belarusians are emptying shop shelves of durable goods, reminding many of the Soviet era when people waited in long lines for food and daily necessities, due to a lack of available goods on store shelves. There were also lines of people outside banks, in the hopes of converting their rubles into dollars or euros.

As of April, Belarus residents have been struggling to cope with a 20 percent price increase on everything in the country, with no end in sight, according to Ekaterina Povlova, who works in a firm that sells small household appliances.

“I can see this happening even in my own firm. We sell products for less than we buy them for. So consumer prices are lagging behind the actual cost of goods,” she explains. Ekaterina says that many shops have simply closed their doors, as they have nothing to sell or they have no money to purchase goods.

“In the beginning, people were in a mad rush to buy everything they could, as prices started to climb. Now the situation seems to have calmed down a bit, though it is hard to say, as nobody knows what tomorrow will bring,” she continued.

In trying to explain the "unusual sociopolitical atmosphere" of the country, Lukashenko said in his annual state of the nation address last week, that opposition demonstrations, economic woes, and a subway bombing that killed 13, are all links in the same chain.

“Some people appear to want to destabilize the country, promulgate chaos, and promote public distrust toward the government,” the president said.

Lukashenko remains concerned over maintaining the stability of his regime that's based on a command-and-distribution model of governance inherited from the Soviet era. He appears unwilling to consider structural reforms.

Balazs Jarabik, an expert with European think tank, FRIDE, says the main causes of Belarus’s economic problems come from within the country, including pre-election public sector wage increases; conflicting decisions on financial and economic policy after the election crackdown that prompted the West to seriously consider limiting Minsk’s access to international institutions, such as the International Monetary Fund; and the Belarus government's heavy dependence on Russia’s political and financial support.

By their reaction to buy as many goods as possible expecting devaluation "Belarusians have little trust in the economic system of their country," says Jarabik.

After the Belarus government’s opposition crackdown, Western countries imposed economic sanctions on top officials and cut off relations with Minsk—demanding that all political prisoners be released as soon as possible. At the time, the authorities had arrested about 600 people. More than 40, including five former presidential candidates, were charged with organizing and taking part in riots related to the demonstrations. Lukashenko won his fourth five-year term with nearly 80 percent of the vote, in an election widely condemned inside and outside the country as rigged.

With a damaged credit rating, Minsk had no choice but to ask Russia for $1 billion in financial aid. The government also asked the Eurasian Economic Community for a second anti-crisis loan package of $2 billion.

This influx of cash could allow Russia to privatize Belarusian strategic enterprises such as petrochemical, machine building, metallurgy, and food plants, according to a Polish Center for Eastern Studies report.

The Belarusian economic system has been functioning for years based on Russian cheap energy and trade preferences that the Kremlin has reduced since 2007, as it tried to force Minsk to make concessions on strategic assets, says the study.

The rising cost of Russian oil and gas has significantly increased the cost of operations for Belarus's command-and-distribution economy. For example, Belarusian refineries barely made a profit in 2010. With continued less favorable conditions from Russia, these plants are working in the red, the study pointed out.

The Belarus’s foreign debt exceeded $28 billion, which is 52 percent of the country’s GDP. Minsk had been largely dependent on foreign handouts in recent years, just to stay afloat.

In his address, Lukashenko tried to convince the nation that 2011 is the beginning of a new era for the Belarusian economy, which includes implementing creative economic changes, as well as bringing investments in line with European living standards.

Pavlova says that when she earned around $300 before this New Year, she did not have to worry about having enough money for food and basic necessities. But since times have changed, she now tries to work two jobs, with four people in her family making the same amount of money or a little more than she does.

“I have to count every single ruble now, just to buy the things we need,” she lamented.