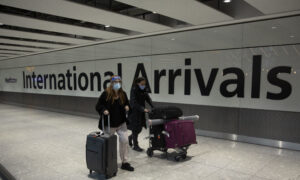 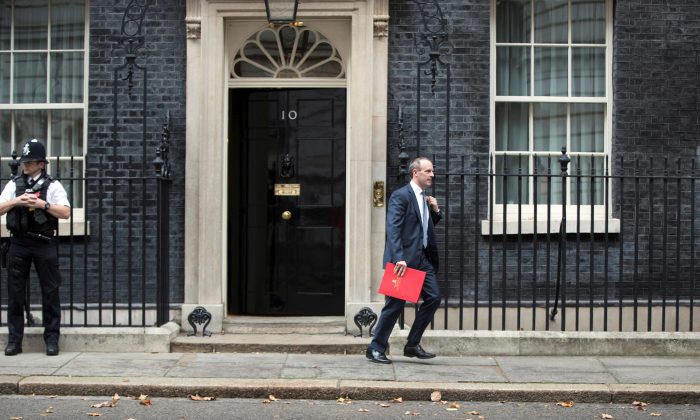 No Deal yet as Irish Border Holds up Brexit, EU and UK Say

LONDON/BRATISLAVA—A Brexit deal is close but not yet done due to differences over the Irish border, Britain and the European Union said on Nov. 6 as sterling see-sawed on contrasting perceptions of how hard it will be for Prime Minister Theresa May to clinch an agreement.

“We are still not at the 100 percent,” the European Union’s chief negotiator Michel Barnier told a news conference. “What is missing is a solution for the issue of Ireland.”

Britain and the EU both wish to keep the border between EU-member Ireland and Northern Ireland in the United Kingdom open after Brexit, as it is seen as crucial to the 1998 Good Friday peace accord that ended decades of sectarian bloodshed in Northern Ireland.

While final arrangements on the border are due to be agreed as part of later trade talks, a backstop arrangement in case such talks fail is proving tricky. Britain’s desire to leave the customs union is not easily reconciled with preserving the integrity of the EU’s single market.

Barnier said the EU was working to improve its offer for the so-called backstop, or an emergency fix to keep the Irish border open regardless of Brexit consequences, but that it must be workable.

London wants the backstop to be provisional rather than permanent, while the EU resists any suggestion it could expire. Barnier said the backstop can have no end-date.

He cautioned that without a deal that prevents a hard border in Ireland, Britain will leave the EU in less than five months without a transition period.

May told her cabinet of senior ministers more work was needed on the Irish backstop, and that while the withdrawal agreement was 95 percent complete, Northern Ireland was by far the main issue outstanding.

It is unclear whether an agreement can be reached in time to hold an emergency summit of leaders in November to sign off the agreement. May told her ministers that aim of doing a deal would “not be done at any cost.”

Irish Prime Minister Leo Varadkar said he was open to creative language and creative solutions to the issue, but reiterated Ireland’s view that the border backstop clause in a Brexit deal can have no expiry date or unilateral exit clause.

The wrangling over whether there would be a deal to leave the EU by Brexit day on March 29 came as a poll suggested Britons would rather stay after all.

Voters would now back remaining by 54 percent to 46 percent, the largest independent survey carried out since the Brexit vote found.

May has repeatedly ruled out a referendum rerun, saying her job is to deliver the 2016 vote to leave the bloc, even as her plan has drawn critics from both sides of the Brexit divide.

She must unite her government, party, and domestic allies around a Brexit plan that is also acceptable to the EU.

“Looks like we’re heading for no deal,” Jeffrey Donaldson, one of 10 Democratic Unionist Party lawmakers whose support May needs to get any deal passed in the British parliament, said on Twitter.

By Alistair Smout and Tatiana Jancarikova