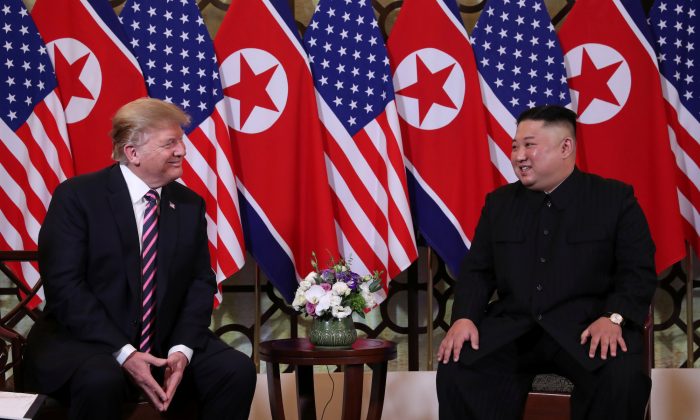 No Deal at Trump-Kim Summit is Bad News for China

President Donald Trump decisively ended the talk with Kim Jong Un in Hanoi, when Kim could not deliver any verifiable promise for denuclearization in exchange for lifting U.S. sanctions. This was a dispiriting end to such a high-profile summit with global attention, especially with so much show of mutual friendship at the beginning.

But no deal is not a failure, as Trump at least reached one of his objectives—to keep the region stable without nuclear tests. On the other hand, no deal is a success, as it means that the United States did not make any compromise, not casually lift sanctions and not offer free cash when dealing with a communist regime. It is already a big success that Trump was not fooled or tricked by a communist regime. And Trump and Pompeo did not abruptly break the connection with North Korea and still showed the willingness for further negotiation.

No deal means that Kim Jong Un rejected a wonderful opportunity to transform his country into an open society. The Trump administration even deliberately arranged the chance for him to see the economic success in Singapore and Vietnam. Kim enjoyed the “glorious” diplomatic show at the summit, for which his own state-run propaganda machine will present endless praise and bring up high hopes. But now he has to face even more pressure from his own party because his trip did not bring any results.

South Korean President Moon Jae-in probably felt uneasy at this moment. When the Trump-Kim summit did not deliver any further progress on the denuclearization on the peninsula, Moon’s efforts to make peace with North Korea last year appeared to be so pale. President Moon is likely facing more criticism for his version of the “Sunshine” policy with Kim Jong Un.

Another person who cannot rest easy would be China’s Xi Jinping. At the press conference in Hanoi, Trump clearly pointed out that 93 percent of supplies that crossed the North Korean border was from China. This is an indirect criticism towards China for breaching sanctions on North Korea. This would become another bargaining chip for the United States at the negotiation table during U.S.–China trade talks.

The Trump administration is already upset over China’s continual support of Maduro’s government in Venezuela. Both Chavez and Maduro are pupils of the Chinese Communist Party (CCP). Maduro is learning the tactics that the CCP used to slander the student democracy movement in 1989, when the CCP set military trucks on fire and blamed the students for it. Maduro is now blaming the United States for setting fires on humanitarian aid trucks on Feb. 23.

The no-result from the Trump–Kim summit and China’s support of Maduro’s regime would allow the Trump administration to see clearly that dealing with socialist or communist regimes is never going to be a smooth process, as their leaders just do not care about the lives of their citizens and the futures of their countries.

Walking out of Hanoi without a deal is not a satisfactory result for the Trump administration and many critics stated that Trump lost a much-needed triumph. However, whatever Trump missed in Hanoi, he would take it out on China in the U.S.–China trade negotiations.

So, no deal from the Trump–Kim summit is actually bad news for China. Walking out of a bad deal shows Trump’s nature as a keen businessman, and the strong will to stick to principles. Xi Jinping will have to worry: Will Trump walk out on me as well when I meet him again in Mar-a-Lago?