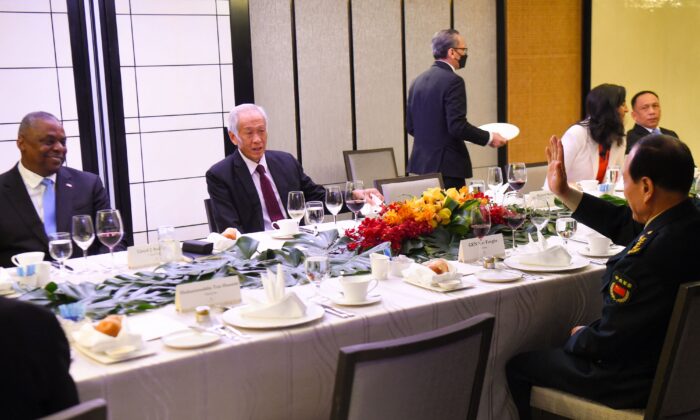 China can decide to debate its stance in open forums like the Shangri-La Dialogue (SLD) or “retreat from that engagement,” Singapore Defense Minister Ng Eng Hen said on June 12.

Ng was responding to a question posed by a Chinese military official during the seventh plenary session of the SLD in Singapore. The three-day forum serves as a platform for regional defense ministers to exchange views on security issues.

Chinese Senior Col. Zhao Xiaozhuo claimed that while the SLD has helped bring together high-ranking officials and scholars to improve communication, some perceived that the United States and its allies were dominating it.

“Also, the topics discussed often point to differences, rather than cooperation, and the divergence rather than convergence,” Zhao added. “So my question is, what role over the past years Shangri-La Dialogue has played in Asia-Pacific security?”

In response, Ng mentioned his experiences attending “a number of conferences,” including Beijing’s Xiangshan Forum, noting that attending such events is sometimes “a matter of taste.”

“I can imagine that people from the [People’s Liberation Army] come here and find this raucous, a bit rambunctious, [that] this is the Western liberal model of many ideas,” Ng remarked.

“And from this, you’re supposed to gain wisdom, and they go back and say it was thoroughly discombobulating. That’s entirely understandable.”

There are also those individuals who dislike attending forums that are “structured” and “too predictable,” Ng said.

“They feel that it’s too scripted that when you say things, the end is already determined. So why not not say it and just send me something and I can read it, rather than travel a few thousand miles to arrive in Singapore?” he added.

Ng further remarked: “For China, it must decide for itself whether the Shangri-La Dialogue adds value. There is no coercion for you to attend.”

“Is it better to come to an open platform, to subject yourself sometimes to a tyranny of questions and to what might seem a common view from others to explain yourself? Or to retreat from that engagement? That is something that China must decide for itself.”

Chinese Defense Minister Wei Fenghe delivered a speech at the SLD on June 12, asking the United States to “stop smearing and containing China.”

Wei said that U.S.-China relations could only improve if Washington stopped interfering in China’s internal affairs.

Speaking at the Shangri-La Dialogue on June 11, U.S. Defense Secretary Lloyd J. Austin said that Washington remains committed to the “One China” policy, but that it would still provide Taiwan with the capabilities necessary to maintain its defense.

“And it means maintaining our own capacity to resist any use of force or other forms of coercion that would jeopardize the security or the social or economic system of the people of Taiwan,” Austin said.

He further noted that Beijing’s recent military maneuvers near Taiwan threaten to destabilize the Indo-Pacific region, while underscoring that sustaining peace and security across the Taiwan Strait is a global issue, not simply a U.S. interest.