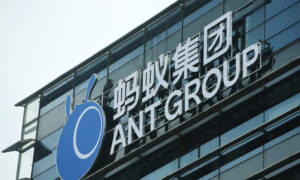 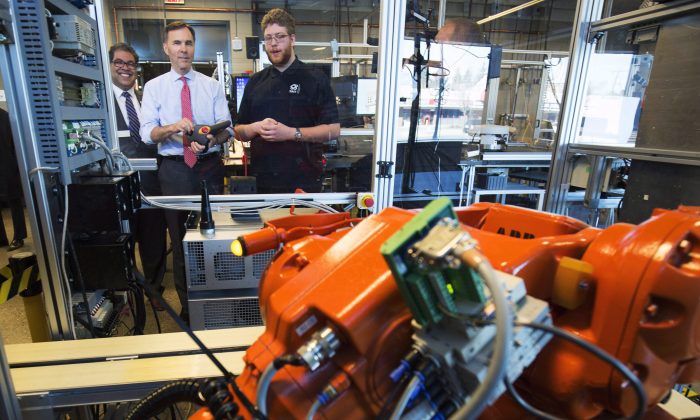 Canada's Minister of Finance Bill Morneau (C) operates a robot with student Spencer Pelzer (R) while Calgary mayor Naheed Nenshi looks on during their tour of the robotics lab at the Southern Alberta Institute of Technology in Calgary on March 27, 2017. Automation threatens many low-skilled jobs, but Canada has benefited from technological advances in the long term. (The Canadian Press/Todd Korol)
Business

The entrepreneurship bug is spreading in Canada. It’s sorely needed for a labor force and an economy that need to adapt in the face of technological change.

The way people work is changing from a generation ago. The work-life balance is more fluid. The “sharing,” or “gig,” economy provides an alternative to how people view the way they work.

“I grew up in a world where I expected to work for the same company for 30 years,” said Tony Bailetti, a professor at Carleton University’s Sprott School of Business, in a phone interview. He is also director of Carleton’s Technology Innovation Management master’s program.

“With my kids, they have five or six jobs and they’re in their 40s and they don’t think twice about it. That’s the way the world goes.”

Given the pace of technological change and automation taking place, Bailetti said the development of entrepreneurial skills enables us to do what we were not able to do before. He compared it with emancipation—a term associated with sociology.

“Once you have those entrepreneurial skills, you feel liberated,” he said. Once liberated, a person is not tied to a job and then rendered obsolete because the technology has changed.

Entrepreneurial skills deal with innovation, creativity, and leadership. Entrepreneurship programs are now offered at many universities and colleges in Canada.

Shopify’s research found that 3 in 10 Canadians have started their own businesses and 53 percent believe that entrepreneurship is a possibility for them in the future. The survey also found that Canadians think entrepreneurs are vital to the economy by creating jobs, innovating, adding to national income, and creating social change.

“Our objective is to make commerce better for everyone and to create more entrepreneurs around the world,” said Harley Finkelstein, Shopify’s chief operating officer, while speaking on a panel about Canada’s innovation agenda on May 15 in Ottawa.

Small business is the engine of job creation. Between 2005 and 2015, of the 1.2 million jobs created, 88 percent was attributable to small business, according to Innovation, Science and Economic Development Canada’s June 2016 Key Small Business Statistics report.

“I only have to build the things that are going to make me distinct as opposed to everything else, which I can acquire in a pretty open market,” he said.

There’s no time like the present to start a business, especially as a tech entrepreneur.

“In 2017, the cost of failure for entrepreneurship is trending as close to zero as it’s ever been,” Finkelstein said. “Technology has completely reduced the barrier to entry of entrepreneurship in a way we’ve never seen before,” he added.

Given the advances in Internet technology, the growing presence of business incubators and accelerators, and the government’s push for innovation, the support system for entrepreneurs is getting better and better.

Once you have those entrepreneurial skills, you feel liberated.
— Tony Bailetti, Carleton University

“If we figure out how to get more entrepreneurial people, I think we are going to have a more dynamic economy,” said serial entrepreneur Daniel Debow.

Bailetti said technology that can change quickly is built on top of pre-existing building blocks that don’t change as fast. Today’s tech entrepreneurs don’t necessarily have to build everything from scratch.

Creating companies that grow and, in turn, create jobs is a tremendous benefit to an economy. Bailetti said what distinguishes companies that do well from those that cease operations in the first few years is whether they were initially created to address a global problem.

He ascribes to the “glocalization” theory. “Invent a better mousetrap and take it global,” he said. The examples of glocalization by large well-known companies are numerous, from the big fast food chains offering different items in different regions to a washing machine manufacturer considering the type of clothing typically worn in a region.

If it wasn’t for advances in technology, we’d be living in caves and dying before we’re 25.
— Tony Bailetti, Carleton University

“We will need people with highly technical skills to program and repair the technology. We will also need people to perform tasks that may never be replicated by a machine because they require creativity, intuitive judgment, inspiration, or simply a human touch,” said Bank of Canada senior deputy governor Carolyn Wilkins in a recent speech to the Toronto Region Board of Trade.

A McKinsey study found that about 60 percent of all occupations have at least 30 percent of activities that are technically automatable based on currently demonstrated technologies.

The consulting firm suggests that it may take at least two decades before automation reaches 50 percent of all of today’s work activities.

Such change is not unheard of in Canada’s history. Employment in the agriculture sector has been falling dramatically—from nearly half the workforce in 1881, to a quarter of it in 1941, to 2 percent of it in 2001, according to Statistics Canada.

“If it wasn’t for advances in technology, we’d be living in caves and dying before we’re 25,” Bailetti said.

The skills needed by the workforce change over time as new technologies are adopted. Gradually, standards of living, productivity, and economic output increase.

“I think that every time there is a technology change, people who do not have entrepreneurial skills suffer the most. No question about that,” Bailetti said.