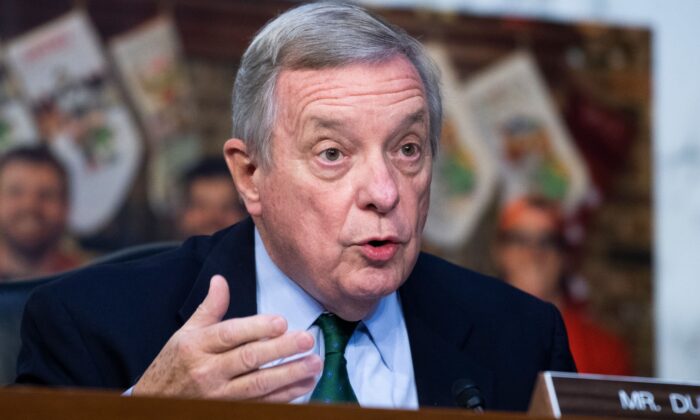 No. 2 Democrat Senator Explains Why He Changed His Mind on Abortion

During a heated July 12 exchange in the Senate Judiciary Committee, Sen. Dick Durbin (D-Ill.) explained his reasoning for changing his mind on abortion after once calling for Roe v. Wade to be overturned.

Under that standard, states were prohibited from restricting abortion before the so-called “viability line”—a term that describes an infant’s ability to live outside of his or her mother’s womb. However, even top biologists in favor of abortion have long disagreed on how to define the “viability line.”

With the SCOTUS decision in Dobbs v. Jackson’s Women’s Health Organization, the power to regulate abortion has been returned to the states—a decision that Democrats have said will have dire consequences for women.

During the hearing, Sen. Mike Lee (R-Utah) noted that Durbin, like many other Democrats, changed his mind on abortion over the past few decades.

To demonstrate Durbin’s change of heart, Lee submitted to the record a copy of a letter that Durbin wrote in 1989 while still a member of the House of Representatives expressing his opposition to the practice and calling for the overturning of Roe v. Wade.

“I believe we should end abortion on demand and at every opportunity I have translated this belief into votes in the House of Representatives,” Durbin wrote in that letter. “I am opposed to the use of federal funds to pay for elective abortions, and will continue to support amendments to prohibit the funding of elective abortions for federal employees and Medicaid recipients.”

“Also,” Durbin added, “I continue to believe the Supreme Court’s decision in Roe v. Wade should be reversed.”

In a recent statement indicative of his change of heart towards abortion in the decades that followed the letter, Durbin wrote: “We know the Republican plan: win control of Congress and impose a federal ban on abortion. Democrats have a different plan: protect your rights by enshrining into law a federal statutory right to an abortion. Politicians have no business making this decision.”

Commenting on Durbin’s 1989 letter, Lee blasted Democrats for their “doomsday calls” about the consequences of overturning Roe v. Wade.

“The doomsday calls from those on the left are ignoring common sense,” Lee said. “They’re ignoring what human instinct tells us about protecting the most vulnerable among us. Members of this committee, including some who are now attacking the Dobbs decision, once shared these views.”

Near the end of Tuesday’s hearing, Durbin explained his change of heart.

“I sat down with two young women who were about to turn 18—one a victim of incest, one a victim of rape—and they told me their stories,” Durbin said. “I didn’t ask them to, but they wanted to tell me. I left that meeting with a kind of understanding that I had never had before about the complexity of the decision behind the abortion procedure.”

He continued: “I thought to myself, ‘As an individual member of Congress, are you ready to pass a law that applies to every woman in America?’ No. It really has to be her decision. And we can regulate it as we should, but at that point I made my break.”

Durbin is not the only prominent Democrat to change his mind on abortion.

Not long after entering the Senate in 1973, then-Sen. Joe Biden said that SCOTUS “went too far” in Roe v. Wade, and in the decades that followed he supported efforts to overturn the decision.

Biden, who was a practicing Catholic with a complicated attitude toward abortion, nevertheless backed a 1982 push to amend the Constitution to allow states to overturn Roe v. Wade.

But in the decades that followed, Biden reversed course on this attitude. In 2007, while mounting his second unsuccessful bid for the presidency, Biden said that Roe v. Wade was “as close to we’re going to be able to get as a society” to balancing the interests of faith and freedom.

“The Court has done what it has never done before: expressly take away a constitutional right that is so fundamental to so many Americans that had already been recognized,” Biden said in an official statement, calling the decision the “realization of an extreme ideology and a tragic error.”

Today, very few Democrats in Congress have any reservations about abortion.

In the House, Rep. Henry Cuellar (D-Texas) is the only Democrat who remains staunchly pro-life.

In May Sen. Joe Manchin (D-W. Va.) joined all 50 Senate Republicans to strike down a bill that Democrats marketed as codifying Roe v. Wade, but which in fact went well beyond the Roe standard.

Prior to that vote, Manchin explained his reasoning for defecting from his party and voting against the legislation. The bill goes well beyond the bounds of Roe v. Wade, he said. But he emphasized that he, like most of the rest of his party, supports Roe v. Wade itself.

“We’re gonna be voting on a piece of legislation which I will not vote for today,” he told reporters. “I would vote for a Roe v. Wade codification if it was today, I was hopeful for that. But I found out yesterday in caucus that wasn’t gonna be.”