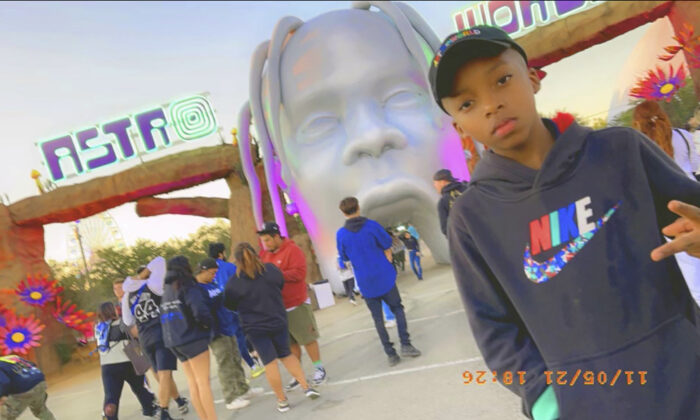 This photo provided by Taylor Blount shows Ezra Blount, 9, posing outside the Astroworld music festival in Houston on Nov. 5, 2021. Ezra has become the youngest person to die from injuries sustained during a crowd surge at the Astroworld music festival. Ezra, of Dallas, died Sunday, Nov. 14 at Texas Children’s Hospital in Houston, family attorney Ben Crump said. (Courtesy of Taylor Blount via AP)
Crime and Incidents

An attorney for the family of a 9-year-old boy who was trampled at a Travis Scott concert in Houston and was on life support for a week said that the child had died from his injuries on Sunday.

The death of Ezra Blount brought the total number of those killed during a stampede at last week’s Astroworld Festival to ten, ranging in age from 9 to 27.

The deaths took place when the Grammy Award-nominated rapper Scott appeared before a crowd of 50,000 at NRG Stadium. The scene grew out of control as fans surged toward the stage.

“The Blount family tonight is grieving the incomprehensible loss of their precious young son,” said attorney Ben Crump. “This should not have been the outcome of taking their son to a concert.”

Crump has said that any one of several concert officials could have prevented deaths and injuries by stopping the show and turning on the house lights when the chaos in the crowd became apparent.

Crump and other attorneys for those hurt at the festival have filed scores of lawsuits against Scott and the organizers, alleging negligence in crowd control, failure to provide proper medical attention, and a lack of emergency preparations, among other issues.

Scott on Thursday asked victims and their families to reach out to him, saying he “desperately wishes to share his condolences and provide aid,” according to a statement. The rapper earlier offered to pay for funeral costs and mental health counseling.