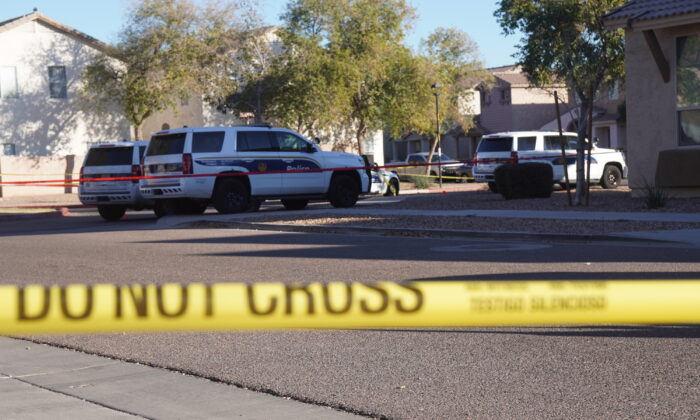 PHOENIX, Ariz.—Phoenix police are working round the clock trying to piece together details that led to the early morning shooting that left nine officers shot or injured and the male suspect dead of a possible self-inflicted gunshot wound.

“I cannot recall an incident in city history where so many officers were injured,” said Phoenix Mayor Kate Gallego during an afternoon press conference near the crime scene at 5400 West Elwood St. in South Pheonix.

“I am incredibly proud of our Phoenix Police Department. These officers chose to run into harm’s way. A baby is safe today because of our Phoenix police officers. We are fortunate that in such a horrific incident, and with so many injured, all are going to be safe. So many face a very difficult recovery.”

Gallego said the White House also reached out to Phoenix police on Friday “with concern.”

“My heart is with the officers and their families and the entire Phoenix police department,” Gallego said. “Today, at the hospital, I was talking to an officer after going into surgery. The officer only wanted to hear about the rest of the squad and how they were doing. That is the type of incredibly selfless individual who serves the city of Phoenix. Nine officers shot or injured—that is an incredibly heavy weight for all of us.”

While details of the incident remained sketchy on Friday, Phoenix police said officers responded to a 911 call around 2:15 a.m., after a neighbor reported hearing gunshots from inside a townhouse in the densely populated Laveen neighborhood of South Phoenix.

Four unnamed police officers were shot during the confrontation and five officers were injured, apparently by shrapnel, during the tense shootout. The female occupant died in the melee while the suspect, Morris Jones, 36, succumbed at the scene to an apparent gunshot wound.

Police said it is not clear whether Jones had committed suicide or was shot by police during the standoff.

A second unidentified male reportedly had placed the toddler on the front steps when police ordered him to do so. When officers went to retrieve the child Jones allegedly began shooting at them, said Phoenix Police Sgt. Andy Williams at the press conference.

The officers reportedly had to abandon the child and take cover before a Phoenix SWAT team arrived minutes later and managed to rescue the toddler.

Williams said the female victim’s name is not being released pending notification of next of kin. The infant has been placed in the custody of child protective services, he said.

Of the nine wounded officers four remain hospitalized, one with critical injuries. All are expected to survive, Williams said.

“The complexity and scale of the scene cannot be overstated,” he said. “Detectives are prepared to work all through today, all through tonight, and all through tomorrow. We only have one chance to do it right.”

“A lot of details that we are still working through,” he said. “I’m not going to speculate on what the officers knew.”

Austin Michael, a former neighbor of Jones and the female victim, broke into tears as he recalled hearing the initial burst of gunshots shortly after 2 a.m. Friday.

“From the noise and my familiarity (with firearms) you could tell it was inside a structure. At first it was an initial four to six rounds, then it was three to five coming from the opposing direction. It was initially handguns,” Michael told The Epoch Times.

Michael said he had been next door neighbors with the deceased for 18 months until last September, and “the only reason I happened to be here last evening is I bought this car from a neighbor’s daughter and the radiator just came in this morning—I spent the evening in my pickup.”

He said he only knew of the deceased through brief encounters with them “parking or unloading groceries or getting their mail.”

“Honestly, I couldn’t tell you what they looked like, but as long as I’ve lived here, riding my electric skateboard I’ve ridden by that home I don’t know how many times. There’ve been no (prior) incidents.”

Michael said that he never imagined the seemingly quiet neighborhood could erupt in such violence.

“I’ve never imagined it would turn to this volume. My [vehicle] exhaust has been stolen twice. I thought that was bad. Then there was the occasional helicopter assessing a domestic distpute. This [shooting] speaks indescribable volumes, in my opinion, and I don’t care who you are. What can you do? I never imagined something this close happening to me.”

Michael wept thinking a child could have been so close to the exchange of gunfire.

“That rubs me really bad the wrong way. I’m very grateful that baby is okay,” he said.

A female neighbor said she heard three sets of gunshots around 2:15 a.m. and what sounded like a car leaving the scene, which made her think of a drive-by shooting.

“It’s a very quiet [neighborhood.] You never hear police. This is actually the first time I’ve seen a group of police over here,” the woman told The Epoch Times on condition of anonymity. “When I say quiet, I mean super quiet. When I heard the gunshots I knew I was close. I had just laid down. And then I started hearing the helicopter. Ten minutes later, some more shots.”

“The tremendous acts of bravery our officers showed this morning just warms my heart. When you see—when you hear what was raging, our officers went in. As a baby was left on the doorstep our officers went in to rescue her, and that’s the kind of police officers we have in our police department and in our community,” Williams said.

“Once again, our community was devastated by acts of violence that not only injured nine officers, but also resulted in the loss of lives of two community members. Four of those officers today are being treated for gunshot wounds. This is yet another example of the dangers our officers face day-in and day-out to keep our communities safe. I said it this morning and I’ll say it again, if I seem upset, I am. This is senseless,” Williams said.