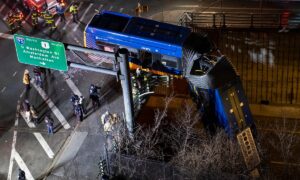 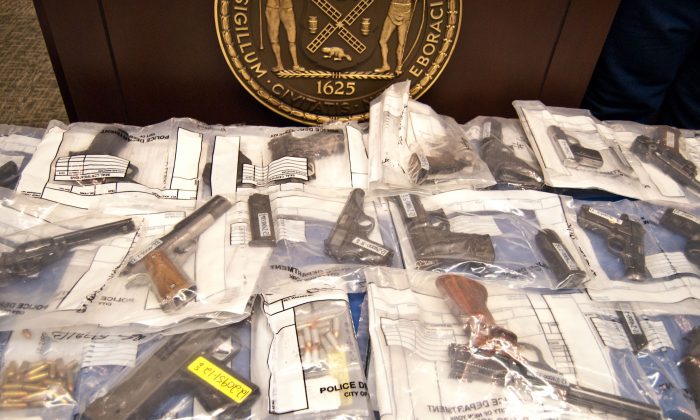 Guns belonging to the Bonanno crime family, one of the five main families of the Italian Mafia, are presented as evidence on July 9. (Joshua Philipp/The Epoch Times)
Crime and Incidents

NEW YORK—Nine members of the Bonanno crime family, one of the five longtime families of the La Cosa Nostra, or Italian Mafia, have been arrested for involvement in extortion, loan sharking, gambling, drug dealing, and possession of firearms.

The Bonanno family is known for its powerful ties to the Local 917 International Brotherhood of Teamsters union, where two family members held leadership positions. They were able to solicit union members as clients in their crimes.

On the morning of July 9, the arrests were made at their homes or workplaces.

A press conference was held at 80 Centre Street to announce the arrests. District Attorney Cy Vance was joined by the NYPD’s Organized Crime Investigation Division deputy chief, Brian O’Neill, and other members of law enforcement.

“Organized crime is still operating in New York City and has its hooks in the labor movement,” Vance said.

Handguns of all sizes, carefully bagged and labeled, were set on a table in front of a podium where Vance told of the mob’s illicit activities. Large black bags of drugs and other evidence sat on a nearby push cart. All of it will be presented at the trial of the now arrested mob boss, his associates, and soldiers.

The mobsters ran primarily out of Brooklyn, but arrests were made in both New York and New Jersey. Vance said one of the members was “in the process of surrendering” at the time of the 11:30 a.m. press conference.

O’Neill said police investigations revealed “a classical organized crime structure,” with the mob boss at the top, with his associates doing work at the bottom and funneling money up the chain.

He said police infiltrated the mob by having an undercover cop get into debt with the mob, then pay off the debt. Through the process, they were able to get surveillance of the upper ring and set up wiretaps—all of which allowed them to “tie the defendants together into one large structure.”