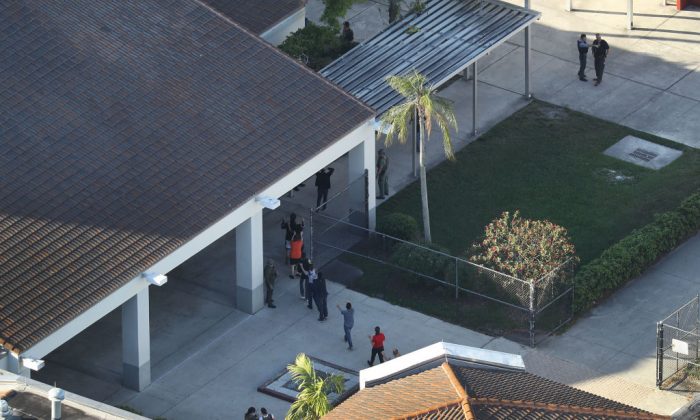 More details about the gunman accused of murdering 17 people at a Florida high school on Wednesday have been released.

Nikolas Cruz, 19 was charged with 17 counts of premeditated murder over the shooting at Marjory Stoneman Douglas High School. On Wednesday, Feb. 14, he was taken into custody without incident by Coconut Creek police.

Cruz was known as a “weird kid” and “loner,” Fox News reported. He was a former student at the school before he got expelled for getting into a fight with his ex-girlfriend’s new boyfriend.

He was expelled from the school last year, according to a news release from the Broward County Sheriff’s Office. A mugshot of Cruz was released by the office on Thursday, Feb. 15.

“All he would talk about is guns, knives, and hunting,” Joshua Charo, 16, a former classmate told the Miami Herald. “I can’t say I was shocked. From past experiences, he seemed like the kind of kid who would do something like this.”

Broward Sheriff Scott Israel told reporters on Wednesday that investigators were sifting through his social media.

“Some of the things that come to mind are very, very disturbing,” Israel said.

Cruz’s mother, Lynda Cruz, died Nov. 1, she was 68 at the time, according to the Sun-Sentinel. Her husband died years ago. The couple adopted Nikolas and biological brother, Zachary, after they moved from Long Island to Broward County.

After the mother died, both boys were left under the care of a family friend.

“I know she had been having some issues with them, especially the older one. He was being a problem. I know he did have some issues and he may have been taking medication,” Barbara Kumbatovich, Lynda’s sister-in-law told the Sun-Sentinel.

“[He] did have some kind of emotional problems or difficulties,” Kumbatovich continued. “[Lynda] kept a really close handle on both boys. They were not major issues, as far as I know, just things teenagers do like not coming home on time, maybe being disrespectful.”

Authorities said Cruz was transported to a local hospital as a precaution after he “exhibited labored breathing,” according to the news release.

Fifteen victims died at the school and two died in the hospital.

The gunman’s motive was not clear as of this writing. Police said he was identified as the only possible shooter.

Investigators only found out later that the shooter had hidden in the fleeing crowd and was among the hundreds of students running out of the school.

Cruz was arrested at a nearby house shortly after the mass shooting. He was using an AR-15.

He is expected to make his first court appearance at 1 p.m. according to Fox News.