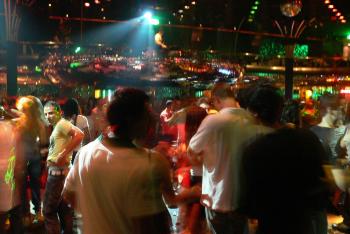 A Dec. 28 decree made nightclub operating and alcohol serving hour uniform across France. Above are dancers at at a French club. (Marcelo Lluberas/AFP/Getty Images)
Europe

New Regulations for Nightclubs in France

Epoch Times Staff
View profile
Follow
biggersmaller
Print
PARIS—Ahead of New Year's Eve and its usual long night of partying in nightclubs, French lawmakers on Dec. 28 passed a new regulation that should improve nightclub rules of operation in France, thereby reducing risks to consumers. The aim of the new decree is to prevent dangerous drinking and to stimulate a sector badly hit by the economic crisis.

Starting Dec. 28, all nightclubs in France have been authorized to remain opened until 7 a.m, ending years of divergent rules in which each French administrative district was free to determine nightclub regulations and operating hours. The most important part of the decree, warmly welcomed by industry professionals, forbids alcohol serving after 5:30 a.m., with the aim of reducing the number of car accidents caused by the explosive mix of tiredness and alcohol. Patrons will have time to sober up after the last rounds are served.

"This is a strong measure that will improve the fight against road insecurity" said Patrick Malvaes, president of the national nightclubs union, to the L'Express newspaper.

Laurent Lutse, president of UMIH, another large hospitality union, said to L'Express, "We have been considered the 'ugly duckly,' yet we have been promoters of alcohol testing and of 'night captains' [designated drivers]. Now, "with the 'white' hour and a half, there should be less sleepy driving, and with clubs closing at 7 a.m., our clients will also be able to use public transportations to get back home."

Night club industry leaders have long criticized the old regulations that made France one of the most stringent European countries for nightclub operating hours, especially when compared to the United Kingdom, Germany, or Spain. The difference in regulations between administrative districts had also created a trend of long-distance driving by people wishing to go to nightclub with 'good' operating hours, thus increasing their risk of being involved in a accident.

The number of nightclubs is shrinking in France, with an estimated 10 percent to 15 percent loss of gross receipts, according to the hospitality unions. More and more, French people are favoring music bars where they can sit in a friendly atmosphere, enjoy some nice wine, and be in an environment quiet enough for discussions.

However, on New Year's Eve, tens of thousands will still be dancing all night long and drinking champagne—but no later than 5:30 a.m. for the latter.