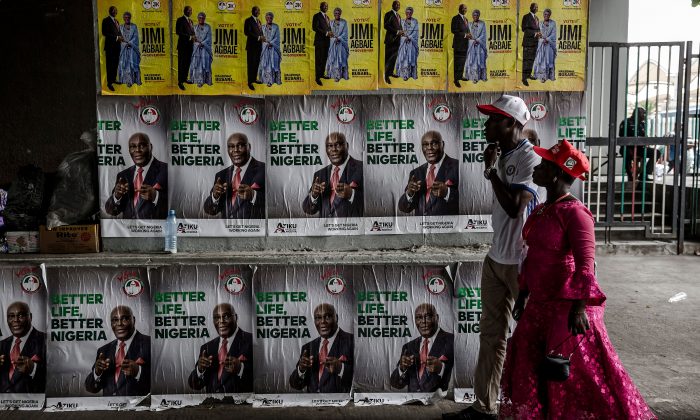 LAGOS, Nigeria—Four years ago, President Muhammadu Buhari of Nigeria rode to power on a wave of optimism, becoming the first opposition candidate to defeat an incumbent president in the political history of the country.

Buhari promised to tackle the country’s myriad challenges, most prominent of which were security, corruption, and other developmental deficits.

As security and economic problems persist four years later, the same disillusionment and concerns about the state of the nation are shared by many Nigerians as the country goes to the polls to elect its president.

Nigeria’s presidential and National Assembly elections will be held Feb. 16, while the governorship and State Assembly elections are scheduled for March 2. About 84 million registered voters and 91 political parties are expected to participate in the election that will determine the fate of Nigeria for the next four years.

Even though the federal government claimed it had defeated Boko Haram—an Islamic terrorist group that seeks to overthrow the government—killings continue unabated. Many communities still reel under the onslaught of the terrorists. Girls and women have been abducted, while many villagers say they have lost confidence in the ability of the state to protect them.

From north to south Nigeria, there are many issues that have the electorate concerned. Chief among them is the volatile security situation, said Okechukwu Nwanguma, the national president of the Network on Police Reform (NOPRIN).

Nwanguma said it was unfortunate that the war against Boko Haram had only recorded minor victories despite funds dedicated to tackling it.

“The failure by the military authorities to adequately equip its soldiers fighting insurgency has led to unacceptably high casualty figures on the path of troops,” he said.

“There are reports of disgruntled and demoralized soldiers complaining of being sent on a suicide mission and some even deserting the war; there are also reports that some of the soldiers are joining the terrorists.”

The inter-communal clashes that have rocked the country over the last four years and left many dead have become a focal point of discourse during the electoral campaigns.

Buhari’s main contender, Atiku Abubakar of the People’s Democratic Party (PDP), has capitalized on his rival’s failure to avert the killings, promising to address the problem.

In December 2018, Amnesty International released a report titled, “Harvest of Death: Three Years of Bloody Clashes Between Farmers and Herders,” in which it estimated that 3,641 deaths had occurred as a result of the conflict over access to land and grazing.

“The Nigerian authorities’ failure to investigate communal clashes and bring perpetrators to justice has fueled a bloody escalation in the conflict between farmers and herders across the country,” the Amnesty International report stated. “In some cases, security forces had prior warning of an imminent raid but did nothing to stop or prevent the killings, looting and burning of homes.”

Lamenting the problem, Chief Edward Ujege, the president general of Mdzough U Tiv, one of the largest tribal groups in Benue state, told The Epoch Times that those who perpetrated the attacks had yet to be arrested or prosecuted.

Ujege said the crisis had led to a drop in food productivity, as Benue’s citizens, who are predominantly farmers, have quit their farms for the fear of being killed by herdsmen.

“As a community leader, I grieve over the loss of lives of my people who died during the attacks. The crisis has also paralyzed education as parents fear to send their children to school,” he said. “The Benue state government enacted the anti-grazing law and establishment of ranches to curb constant herdsmen killings but has not enjoyed the support of the federal government to make this work.”

Chidi Odinkalu, former president of the National Human Rights Commission (NHRC), also expressed concerns about the killings, while also criticizing the government for not effectively tackling security issues and getting justice for the victims.

“I can’t see any legacy this government will bequeath to the next one. First, it took the president several months to constitute his cabinet. In terms of security, the government has shown a lack of empathy [and] imagination in solving the conflicts,” he said. “The president has also failed in terms of communicating with the masses about its plans for them.”

The president was hailed for implementing the Treasury Single Account system, which plugged leaks in the country’s finances.

But while some progress has been made in fighting corruption, Buhari’s critics and opposition have picked holes in his efforts, alleging lopsidedness in the war against graft. He has also come under intense criticism for constitutional abuse and illegal detention of citizens.

Recently, members of the PDP protested Buhari’s decision to suspend the chief justice of Nigeria, Walter Onnoghen, who is accused of breaching asset-declaration laws.

The United States and the UK separately issued statements on the development, noting it may affect the credibility of the election.

“We note widespread Nigerian criticism that this decision is unconstitutional and that it undermines the independence of the judicial branch,” the U.S. Embassy said in a statement.

Another issue that has shaped the campaign is the president’s health. The PDP has vigorously campaigned against Buhari, citing his health condition as a reason why Nigerians should consider voting for Abubakar.

The president has cumulatively spent several months in the UK for an undisclosed ailment, handing over governance to Vice President Yemi Osinbajo in his absence.

But the director of strategic communications for Buhari’s campaign, Festus Keyamo, has dismissed the allegation that the president is not fit to rule Nigeria.

“For those who see PMB [President Muhammadu Buhari] on roof tops of buses campaigning around the country and who still question his fitness for elections, we need to first carry out a psychiatric evaluation on them to determine whether they have the mental capacity to even be part of our political discourse,” he wrote on Twitter.

Adeniyi Akintola, a political activist and lawyer, blamed the past government for most of the problems the country faces.

Akintola said the president inherited too many problems, which made it overwhelming to fix the country within four years. Akintola called for patience, adding that Nigeria’s problems require a lot of time and effort owing to damage done during the long years of military rule.

To ensure a free and fair election and to avoid violence, Nwanguma urged the government to look at the security threat assessment carried out in October 2018 by the CLEEN Foundation NGO, which indicated that 12 states in Nigeria have a high probability of electoral violence.

The United States has also made a similar appeal to stakeholders, urging all parties “to ensure that the elections proceed in a way that is free, fair, transparent, and peaceful—leading to a credible result.”