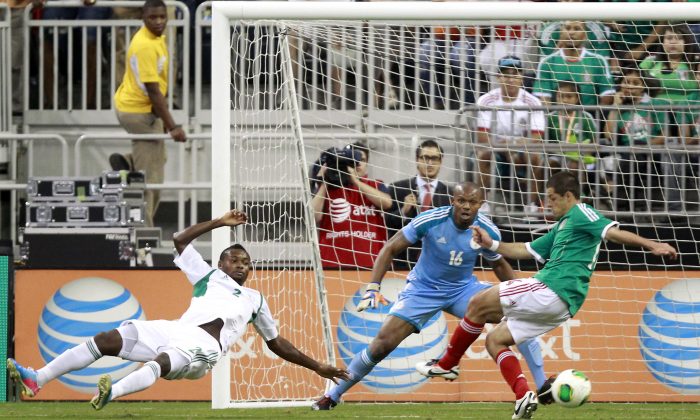 Mexico forward Javier Hernandez, right, attempts to shoot past Nigeria goalkeeper Austin Ejide (16) and defender Godfrey Oboabona (2) during the first half of a soccer game on Friday, May 31, 2013, in Houston. (AP Photo/Patric Schneider)
Soccer

It’s Mexico vs Nigeria in a FIFA international friendly on Wednesday, March 5–one of many friendly matches that are taking place around the world on the same date.

The game is set at the Georgia Dome in Atlanta in the United States. Kick-off is set for 8:30 p.m. EST.

It will be broadcast live on Watch ESPN, ESPN3, ESPNEWS, UniMas, and Univision Deportes in the Unites States.

It will also be live streamed on ESPN in Brazil and beIN Sports Arabia 3 HD in the Middle East and some African countries.

Mexico is currently ranked 21st while Nigeria is ranked 47th–both teams made into to the World Cup later this year.

Nigeria emerged as the African champions last year and will be looking to carry momentum into the World Cup.

Mexico won their first 2014 game against Korea in January and are also looking for momentum with just five games left before the World Cup.

Line up hasn’t been announced yet.