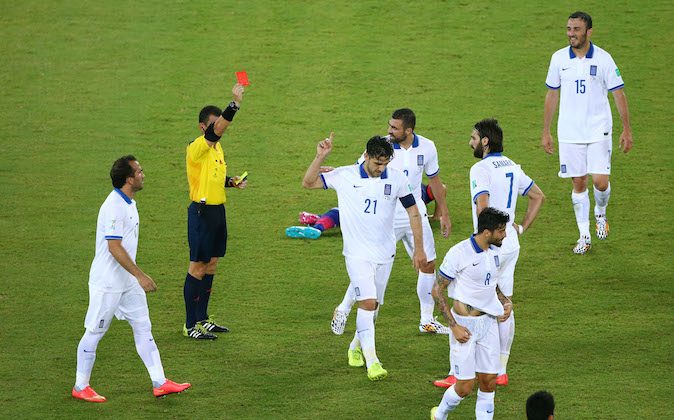 Nigeria and Bosnia-Herzegovina will go head-to-head on Saturday, June 21 in a World Cup 2014 Group F match.

Things Should Get Easier for Bosnia at World Cup

BRASILIA, Brazil (AP) — Ultimately sunk by a moment of magic from Lionel Messi, the Bosnia-Herzegovina squad emerged with plenty of credit — but no points — from its World Cup debut against Argentina.

Thankfully for them, it should get easier in Group F.

Nigeria may be the African champion but the team won’t have a player anywhere near the standard of Messi when it takes on Bosnia on Saturday in what is a pivotal match in the likely tussle for second place in the group.

Nigeria was held to a 0-0 draw by Iran in its opening game, so qualification for the knockout stage is wide open in the group. And given how they troubled Argentina for much of the 2-1 defeat in Rio de Janeiro, the Bosnians are still being given a strong chance to advance.

“We haven’t shown everything we are capable of yet,” Bosnia-Herzegovina coach Safet Susic said. “I hope that Argentina will win their other two games, because if they do then the second spot will be between Iran, Nigeria and Bosnia . I am convinced that we still have everything to play for.”

A country ravaged by war two decades ago, Bosnia-Herzegovina is proud just to be on world football’s biggest stage for the first time, but it is more than simply a party in Brazil for the players.

They shackled Argentina well in the first half at the Maracana and only slipping off the pace in the second half after a change in tactics by their opponents that gave Messi more freedom.

Against Nigeria, Susic has pledged to return Vedad Ibisevic, who scored after coming on as a substitute, to the starting lineup and, therefore, play two up front alongside Edin Dzeko. That’s the approach they went with in qualifying and the Bosnians were one of Europe’s most free-scoring teams, netting 30 goals in 10 games.

Nigeria would have expected to beat Iran and will see the second game as a must-win, given that Argentina looms in its last group game.

“That’s like a final match for us,” Nigeria goalkeeper Vincent Enyeama said.

Reaching the knockout stage for only the third time is motivation in itself, but Nigeria’s players are even more determined to succeed in Brazil in the wake of a suicide bombing attack against a World Cup viewing site in the northeast of their home country on Tuesday. Police say 14 people were killed and at least 26 wounded in the blast.

“We know that beating Bosnia will not bring back the lives of all those who are dead,” Emmanuel Attah, the team’s coordinator, said, “but then it is our own way of saying ‘sorry for the loss.'”

Nigeria center back Godfrey Oboabona could miss the match after hurting his ankle against Iran.