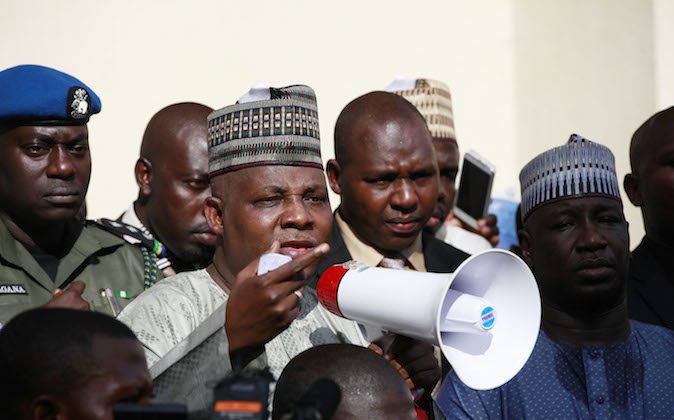 Borno state governor, Kashim Shettima, centre, addresses demonstrators who were calling on the government to rescue the kidnapped schoolgirls of the Chibok secondary school, in Abuja, Nigeria, Tuesday, May 13, 2014. A Nigerian government official said "all options are open" in efforts to rescue almost 300 abducted schoolgirls from their captors as US reconnaissance aircraft started flying over this West African country in a search effort. Boko Haram, the militant group that kidnapped the girls last month from a school in Borno state, had released a video yesterday purporting to show some of the girls. A civic leader said representatives of the missing girls' families were set to view the video as a group later today to see if some of the girls can be identified. (AP Photo / Sunday Alamba)
Africa

ABUJA, Nigeria— U.S. reconnaissance aircraft flew over Nigeria in search of the nearly 300 kidnapped schoolgirls Tuesday, a day after the Boko Haram militant group released the first evidence that at least some of them are still alive and demanded that jailed fighters be swapped for their freedom.

A Nigerian government official said “all options” were open — including negotiations or a possible military operation with foreign help — in the effort to free the girls, who were shown fearful and huddled together dressed in gray Islamic veils as they sang Quranic verses under the guns of their captors in a video released Monday.

The footage was verified as authentic by Nigerian authorities, who said 54 of the girls had been identified by relatives, teachers and classmates who watched the video late Tuesday.

The abduction has spurred a global movement to secure the girls’ release amid fears they would be sold into slavery, married off to fighters or worse following a series of threats by Boko Haram leader Abubakar Shekau.

Protesters marched through the streets of the capital, Abuja, Tuesday to demand more government action to find and free the girls, who are believed to be held in the vast Sambisi forest some 20 miles (30 kilometers) from the eastern town of Chibok, where they were seized from their school on April 15.

A U.S. reconnaisance mission was being carried out by a manned MC-12 surveillance aircraft, which is based in Niger, according to senior U.S. defense officials in Washington. In addition to the turboprop model which has seen heavy use in Afghanistan, U.S. officials were also considering the use of drones.

Gen. David Rodriguez, head of U.S. Africa Command, was in Abuja on Tuesday meeting with officials at the U.S. Embassy, according to the defense officials, who spoke on condition of anonymity because they were not authorized to discuss the matter publicly.

The Nigerian military said in a statement that Rodriguez visited Nigeria’s defense headquarters to discuss U.S. support for Nigeria’s campaign against the Boko Haram militants, who have killed more than 1,500 people this year in a campaign of bombings, massacres and kidnappings.

Nigeria’s government initially said there would be no negotiations with Boko Haram, but that stance appeared to have been relaxed amid growing public outrage at home and abroad over the failure to rescue the girls.

Mike Omeri, the director of the government’s information agency, said all options were being considered, including the possibility of a military operation with foreign help.

“At the moment, because all options are open, we are interacting with experts, military and intelligence experts from other parts of the world,” he said late Monday. “These are part of the options that are available to us, and many more.”

In a statement late Tuesday, authorities in Borno state said that 54 girls in the video had been identified by relatives and friends, including four of some 50 students who managed to escape their captors. At least 276 girls are still missing.

In the video, a camouflage-clad Shekau appeared separately from the girls, an assault rifle slung over his chest, and warned menacingly: “I swear to almighty Allah, you will not see them again until you release our brothers that you have captured.”

He said the girls, most of whom are Christians, had converted to Islam.

Boko Haram, whose name means “Western education is sinful,” has waged a five-year campaign of bombings, massacres and abductions that has killed thousands in its drive to impose an Islamic state on Africa’s most populous nation. It has tried to root out Western influence by targeting schools, as well as attacking churches, mosques, government buildings and security services in the country of 170 million, divided between a predominantly Christian south and Muslim north.

On Tuesday, President Goodluck Jonathan asked the National Assembly to extend the state of emergency in Borno and two other northeastern states for another six months. The emergency, first imposed in May 2013, and extended in December, has been fiercely opposed by many northern politicians who argue that it has created great hardships for the local population while allowing the military to commit rights abuses even as it fails to curtail the insurgency.

Nigerian security forces have moved quickly to force the militants from urban centers, but have struggled for months to dislodge them from rural areas and hideouts in mountain caves and the dense Sambisa forest bordering Cameroon.

Britain and the U.S. are now actively involved in the effort to rescue the missing girls. Britain, which has dispatched security experts to Nigeria, said it was also offering “longer-term counter-terrorism solutions to prevent such attacks in the future and to defeat Boko Haram.”

Pentagon Spokesman Col. Steve Warren said the U.S. was coordinating its efforts with other allies in Nigeria. Countries including Israel and Spain have also offered to help.

Meanwhile, Nigeria’s government said in a statement late Tuesday that Interpol has issued a red alert for the arrest of a terror suspect known as Aminu Sadiq Ogwuche, an army deserter who is accused of playing a role in a deadly April 14 bombing in Abuja blamed on Boko Haram.