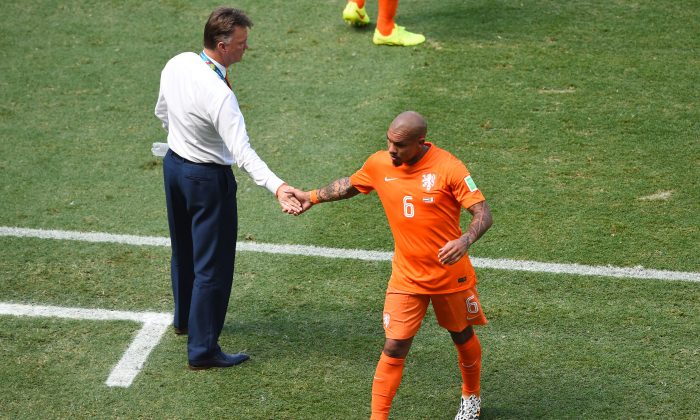 Nigel de Jong of the Netherlands shakes hands with head coach Louis van Gaal as he exits the game during the 2014 FIFA World Cup Brazil Round of 16 match between Netherlands and Mexico at Castelao on June 29, 2014 in Fortaleza, Brazil. (Jamie McDonald/Getty Images)
Soccer

Netherlands midfielder Nigel de Jong was substituted after only 9 minutes against Mexico.

See an AP article on the matches on Sunday.

Netherlands Face Mexico in 2nd Round of World Cup

RIO DE JANEIRO (AP) — The Netherlands will put its perfect record on the line in the second round of the World Cup on Sunday, taking on a Mexico side aiming to reach the quarterfinals for the first time since hosting the 1986 tournament.

The Dutch have scored 10 goals in their opening three matches, more than any other team at the tournament. But Mexico has conceded only one, and that was a late consolation goal in the 3-1 win over Croatia.

In the other game, surprising Costa Rica will face Greece in a match between two teams that have never before advanced out of the group stage at a World Cup.

What to watch on Sunday:

The Netherlands has plenty of star power on its team, and several of those stars have plenty of World Cup experience after reaching the final in South Africa four years ago.

With Robin van Persie and Arjen Robben leading the Dutch attack, goals can come quick and easy. But Netherlands coach Louis van Gaal has a new worry in Brazil as the team heads north to face the Mexicans in Fortaleza, a coastal city with a tropical climate.

FIFA can call for official cooling breaks to be implemented if the temperature is excessive, but they were only used twice in four matches in the hot and humid Amazonian city of Manaus in the group stage.

Van Gaal is hoping there will be more cooling breaks on Sunday to help his team against a Mexican squad that has been impressive so far, winning two games and holding Brazil to a 0-0 draw.

“Drinks will be along the sidelines if FIFA doesn’t take care of it,” Van Gaal said.

Mexico is led by coach Miguel Herrera, one of the most entertaining figures of the World Cup. The emotive Herrera wears a suit and a tie on the bench, but he rumbles up and down the sidelines and shakes his arms in the air when his players score.

And score Mexico did against Croatia, with three goals in a 10-minute span from Rafael Marquez, Andres Guardado and Javier “Chicharito” Hernandez.

Costa Rica has been one of the biggest surprises of the World Cup, getting through a group that included four-time champion Italy and always hopeful England to reach the knockout stages for the first time.

The Central Americans will face another team which has never been this far at the World Cup, but Greece does have some experience being an underdog at a major tournament, winning the 2004 European Championship as rank outsiders.

Greece advanced from Group C with a late penalty winner against Ivory Coast. But Costa Rica made its way through Group D as the best among a group of teams loaded with world-class quality, including Italy’s Andrea Pirlo and Mario Balotelli and England captain Steven Gerrard.

The Costa Ricans opened with a 3-1 win over Uruguay, then beat Italy 1-0 and drew 0-0 with England. Another win on Sunday will see another European team eliminated at the hands of the Central Americans.