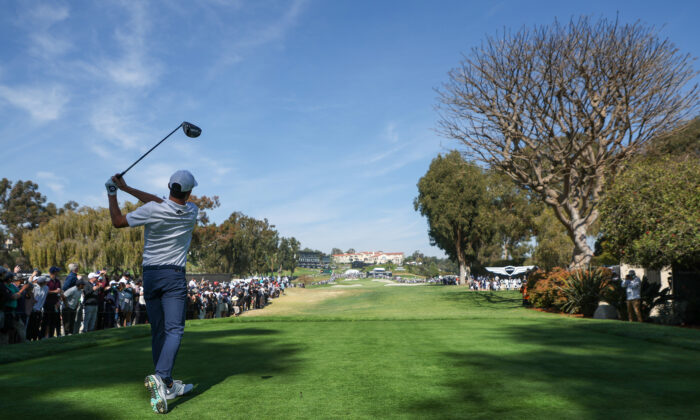 Joaquín Niemann of Chile plays his shot from the ninth tee during the final round of The Genesis Invitational at Riviera Country Club in Pacific Palisades, Calif., on Feb. 20, 2022. (Rob Carr/Getty Images)
Golf

In a field that included all top 10 ranked players in the world, 23-year old Joaquin Niemann became the fourth ever wire-to-wire champion at The Genesis Invitational at Riviera Country Club in the Pacific Palisades on Feb. 20, 2022;  joining the company of Ben Hogan (1948), Lloyd Magnum (1956), and Charlie Sifford (2022) to win leading every round.

The turnout of spectators was estimated as the tournament’s largest, as Niemann was alongside tournament host Tiger Woods for the trophy presentation and received the winning purse of $2,160,000 and 550 FedEx points from the total purse of 12 million.

Woods played his first PGA Tournament at Riviera Country Club in 1992 at 16 years old, but has never won this tournament which was originally known as the Los Angeles Open beginning in 1926.

“It’s unbelievable,” said Niemann. “I had a couple of chances to win my second tournament, and I missed them. I’m so proud (and) happy we made it now. Knowing that Tiger is gonna hand me the trophy makes it a lot more special.”

The victory is  Niemann’s second on the PGA Tour, making him the youngest with multiple victories; his first coming at A Military Tribute at The Greenbrier, in September 2019.

Having turned professional in April 2018 following 44 weeks as the No. 1 ranked golfer in the World Amateur Golf Rankings, Niemann became the first PGA Tour winner from Chile, and the youngest international to win on tour.

Niemann, along with Jordan Spieth in 2013 and Jon Rahm (Spain) in 2016, was able to obtain PGA Tour cards, having started the season without any status or advancing through the PGA Korn Ferry Tour, formerly Web.com Tour.

“It’s the toughest tournament I think during the year,” said Niemann. It’s got the best field, the best players are here, and that proves that I can be competing with the top guys. I can be up there in the world ranking, I think it’s going to give me a lot of confidence for what is coming next.”

The best score of the final round came from world No. 1, Jon Rahm, at –6 for a total of seven-under for the tournament to finish in a five-way tie for 21st.

The second best score of Sunday was by world No. 2, Collin Morikawa, a Los Angeles native currently residing in Las Vegas.

On Saturday, Morikawa had told his caddie that he felt like he had a chance if he was within nine strokes of the lead, “because you never know what’s going to happen.”

Young, a 24-year old rookie, started the final round three strokes behind Niemann and was only able to get within two strokes, shooting one-under for the day. He briefly held the record low 36-hole score Friday by 2 strokes after shooting rounds 66 and 62, but Niemann shortly broke Young’s record by two strokes with two rounds of 63.

Previous champion, Adam Scott, finished tied for fourth with a final round of six-under for a total of –14.

Tied with Scott is world No. 4, Viktor Hovland, with a final round of 70; while Justin Thomas, world No. 7, also shot one-under to finish –13 for sixth alone.

Scottie Scheffler moved up to world No. 6 with a tie for seventh and his first victory last week at the WM Phoenix Open, alongside Maverick McNealy at minus 12.

Rory McIlroy, world No. 5, finished in a three-way tie at –10, with Chez Reavie and defending champion local Max Homa.

Dustin Johnson, world No. 9 and prior champion, missed the cut; while world No. 10 Hideki Matsuyama tied for 39th at four-under.

Riviera Country Club will host the Golf competition for the 2028 Olympics.

The PGA Tour moves to Florida at The Honda Classic in Palm Beach Gardens from Feb. 24–27.