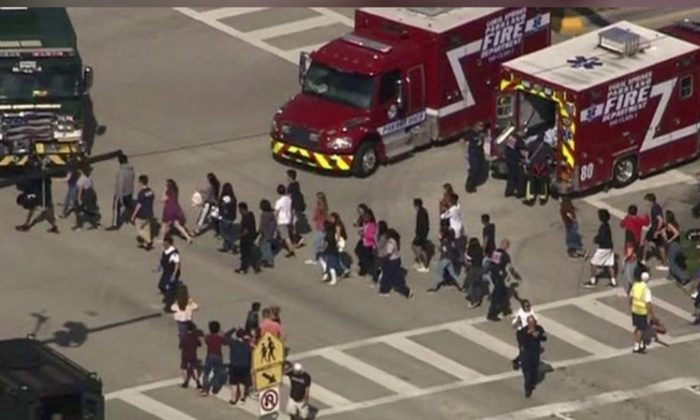 Students are evacuated from Marjory Stoneman Douglas High School during a shooting incident in Parkland, Florida, U.S. February 14, 2018 in a still image from video. (WSVN.com via REUTERS)
US News

Nicolas Cruz, 19, was identified as the suspect in a Florida high school shooting on Wednesday afternoon, the Miami Herald reported.

Cruz, an ex-student, who was detained by police in Broward County, has not been officially named as the suspect. Law enforcement sources identified him in reports from the Herald and The Associated Press.

“We were told last year that he wasn’t allowed on campus with a backpack on him,” math teacher Jim Gard told the paper. Cruz was in his class last year.

He said, “There were problems with him last year threatening students, and I guess he was asked to leave campus.”

Nicolas de Jesus Cruz, a 19-year-old former student at Douglas High School in Parkland, Florida, identified as suspected shooter. He was previously reported as a threat to the school, according to the @MiamiHerald https://t.co/l7jJXBZlt5 #breaking pic.twitter.com/xmmA0RQOCx

The Broward County School District Superintendent, however, didn’t know of any concerns raised about Cruz.

“We received no warnings,” Superintendent Robert Runcie said. “Potentially there could have been signs out there. But we didn’t have any warning or phone calls or threats that were made.”

The attack took place shortly before dismissal at Marjory Stoneman Douglas High School in Parkland, about 45 miles (72 km) north of Miami, sending hundreds of panicked students fleeing into the streets while dozens of police and emergency services personnel swarmed the area, Reuters reported.

Fourteen wounded people were transported to area hospitals, Israel told a press conference said. He added that police were still searching the school for victims.

Students hid in classrooms until they were rescued by police in tactical gear, friends and family members said.

McKenzie Hartley, 19, who identified herself as the sister of a student at the school, described the scene in a text message to Reuters: “She heard him shooting through the windows of classrooms and two students were shot.”

“It is just absolutely horrifying. I can’t believe this is happening,” Lissette Rozenblat, whose daughter goes to the school, told CNN. Her daughter called her to say she was safe but the student also told her mother she heard the cries of a person who was shot, Reuters reported.