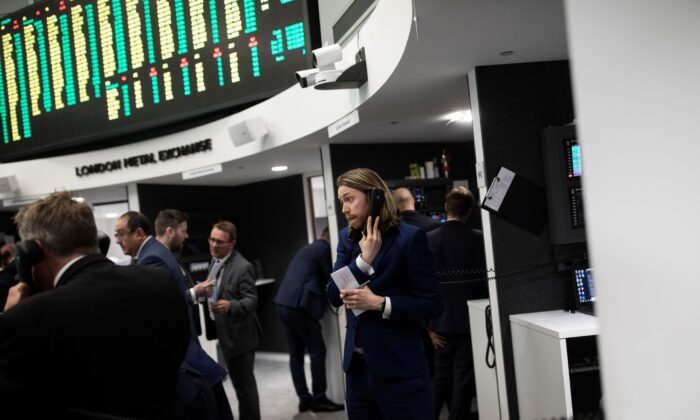 Traders work on the floor of the London Metal Exchange, in London, Britain, on Sept. 27, 2018. (Simon Dawson/Reuters)
UK

LONDON—The London Metal Exchange had hoped to get the global market for nickel motoring again on Wednesday after a week in limbo. It didn’t work out as planned.

The world’s oldest metals exchange was forced to halt trading on its electronic system within a minute of opening due to a technical glitch and when it resumed in the afternoon there were very few trades.

The shambolic reopening piled more pressure on the LME, which is already facing a hail of criticism for suspending the market after a wild spike in prices last week left some traders facing billions of dollars in losses.

LME nickel prices are used as a reference for deals between end users of the metal and producers, and the disorderly market resumption left some traders questioning whether participants might look for alternative venues.

“This is difficult for the market and all its participants,” said Michael Widmer, head of commodities research at Bank of America.

“If you are pricing off the LME contract but you don’t have a reference price, if you are buying your raw materials on an LME price, if you have to manage your cash flows—it’s difficult,” he said.

The LME nickel market was suspended a day later after China’s Tsingshan Holding Group bought large amounts of nickel, propelling the metal up more than 50 percent in a matter of hours to a record above $100,000 a tonne, sources have said.

To prevent wild price swings when trading resumed on Wednesday, the LME introduced limits of 5 percent above or below an adjusted closing price of $47,986, but technical issues allowed some trades to go through under the lower limit of $45,590.

The exchange said trades executed on the LMEselect system at the lower limit would remain, but any below would be cancelled.

“What a mess. It’s embarrassing; disorderly doesn’t even begin to describe it,” one metals trader said. “People will start thinking about moving away from the LME.”

The turmoil has forced the LME to widen its nickel trading limit to 8 percent, adding it could adjust the limits on nickel and other metals further depending on market conditions.

The price of nickel, which is used to make stainless steel and is a key material for electric vehicle batteries, had been rising steadily even before the conflict in Ukraine ramped prices up even further and triggered last week’s chaos.

Russia accounts for about 10 percent of global nickel output and traders were concerned supplies could be constrained by Western sanctions on Moscow.

In the LME’s official outcry session on Wednesday, which is conducted with hand gestures in a trading ring in London, prices also hit the lower limit but when electronic trading resumed at 1400 GMT.

“People are waiting to be comfortable with the LME price,” said Robert Montefusco at broker Sucden Financial. “Until that happens it’s hard to see much liquidity coming back into the market.”

Nickel trading on the Shanghai Futures Exchange was halted for one day last week but has since continued while the LME contract has been out of action. Nickel traded in Shanghai at 235,200 yuan a tonne, or around $37,000, on Wednesday.

Sources said there was a lot of nickel on offer on the LME’s system earlier in the day as traders were expecting prices to fall towards those in Shanghai, especially in light of recent Tsingshan developments.

Tsingshan said this week it had come to a standstill agreement with a group of banks, which fueled expectations that it would longer need to buy metal immediately to cover its bets on lower prices.

The bearish sentiment was reinforced by a Wednesday report from the state-backed Shanghai Securities News that Tsingshan had agreed with two companies to swap its nickel with a purer form of the metal to close out its large LME positions.

“LME nickel is on its own, completely dislocated from the rest of the world,” said Saxo Bank analyst Ole Hansen. “For now, let’s say Shanghai nickel is the global market because at least it is trading.”

The LME put in place 15 percent trading limits for all of its other main metals including copper and aluminium this week, the first time in its 145-year history that it has put limits on outright contracts.

“The big questions is why did the LME set a 5 percent limit for nickel when they put 15 percent on other metals. If they had left this alone it would have probably gone down around where Shanghai is,” said Malcolm Freeman at Kingdom Futures.

Besides suspending nickel trading for only the second time in its history, the LME also cancelled all trades on March 8 and extended deadlines for those with obligations to deliver physical metal against its contracts.

The LME, the world’s oldest and largest market for industrial metals, is owned by Hong Kong Exchanges and Clearing Ltd.