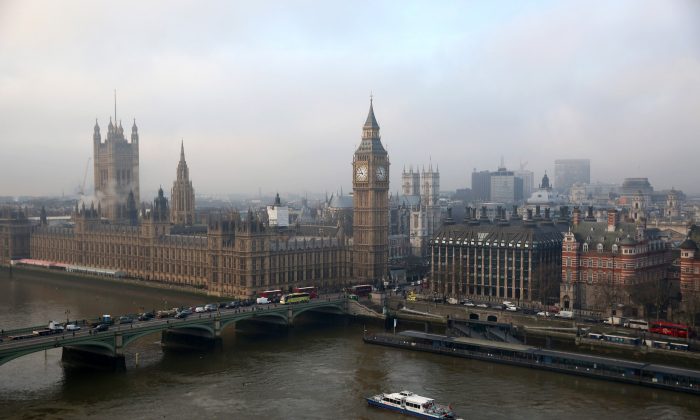 The Houses of Parliament and the river Thames on January 21, 2014 in London, England. (Oli Scarff/Getty Images)
UK

LONDON—A man who alleged he was a victim of an historical child sex ring involving high-profile figures including senior political and military individuals has been charged with perverting the course of justice, prosecutors said on Tuesday.

British police launched a major investigation in 2014 after the man, who cannot be named and has only ever been known by the pseudonym of “Nick”, told detectives he had been abused at military locations and at apartments close to parliament.

He also said the pedophile gang had murdered three young boys. The allegations led to ex-lawmaker Harvey Proctor and former army chief Edwin Bramall being identified as suspects in the media after police searched their homes.

His claims were later dismissed and detectives were criticized for dozens of serious failings.

The Crown Prosecution Service (CPS) said a 50-year-old man had now been charged with 12 counts of perverting the course of justice and one count of fraud following a new police inquiry.

“The police investigation provided evidence that the man had made a number of false allegations alleging multiple homicides and sexual abuse said to have been carried out in the 1970s and 1980s,” said Frank Ferguson, the CPS Head of Special Crime.

“Following careful consideration, we have concluded there is sufficient evidence to bring a number of criminal charges.”

The charges included that he “made a false allegation of witnessing the child homicide of an unnamed boy committed by Mr Harvey Proctor” and that he alleged he had been abused by a pedophile ring involving senior ranking military officers and an unnamed TV presenter.

When the allegations were first made, police described the claims as “credible and true”, comments which detectives later acknowledged were misleading.

Police closed down the “Operation Midland” in 2016 and a review found serious mistakes had been made in the investigation and in a similar inquiry which had examined allegations about Leon Brittan, a former Home Secretary (interior minister) in Margaret Thatcher’s government in the 1980s.

Brittan died in 2015 without knowing he would not face prosecution while police later apologized to Proctor and Bramall and paid them compensation.

Operation Midland was launched after a series of child sex scandals and revelations that celebrities, such as former BBC star Jimmy Savile, had been involved in widespread abuse.