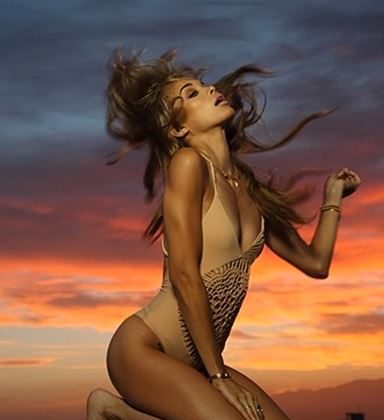 Jasmine Sanders in the photo that looks like Mariah Carey's latest album cover.
US

Nick Cannon has a new girlfriend following his separation from Mariah Carey, who looks remarkably similar to Carey.

“In a nude one-piece swimsuit with crochet details, the Ralph Lauren stunner, who calls herself ‘Golden Barbie,’ stands in front of a vivid sunset on the sand- just like Carey, 44, on her Me. I Am Mariah…The Elusive Chanteuse cover, which was revealed in May,” it said.

Star Magazine reported that Cannon, known for a range of roles including currently hosting America’s Got Talent, was recently at a launch party for his new venture NCredible Tablet.

Carey was nowhere in sight but a witness said that Cannon, 26, looked “happier than ever” with Sanders.

“They could barely keep their hands off each other,” the witness said.

Star claims that Cannon has a number of mistresses. “Mariah can’t stand the fact that Nick is spending time with other women and wants the divorce proceedings to go as quickly as possible,” a source said.

Cannon has admitted the separation and says he’s been living separately from his wife of four years.

The separation allegedly happened over Cannon’s flirting with other women and Carey’s anger over his actions.

“Mariah thinks that when Nick travels that he cheats on her,” a source said last week. “Mariah is super jealous.”