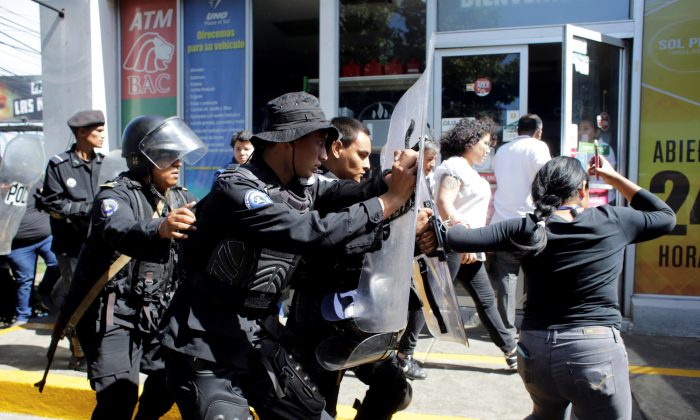 Riot police dislodge journalists from the main entrance to the police headquarters in Managua, Nicaragua, on Dec. 15, 2018. (Reuters/Oswaldo Rivas)
Americas

MANAGUA—Nicaraguan police on Dec. 15 beat at least seven journalists with batons, including one of the country’s best-known editors, in an escalating crackdown on members of the free press.

The beatings come in the wake of waves of protests against Nicaragua’s President Daniel Ortega, who heads the country’s leftist regime.

More than 300 people have been killed and thousands injured in crackdowns by Nicaraguan police and armed groups in protests that began in April over an abortive plan by Ortega’s government to reduce welfare benefits.

The protests soon escalated into broader opposition against Ortega, who has been in office since 2007.

Earlier this week police occupied the offices of prominent editor Carlos Fernando Chamorro, along with buildings used by several civil society organizations it had banned.

Journalists on Saturday gathered outside the police headquarters in the capital Managua. Chamorro asked officers outside for information about what he called the illegal raid on his offices, in which officers confiscated equipment and papers.

After his request, policemen in anti-riot gear emerged from the headquarters swinging batons at and kicking Chamorro, his colleagues, and reporters who were at the scene to cover the event.

A Reuters witness counted at least seven journalists from international and national media, including Chamorro, who were grabbed and kicked by the police.

The police chased the journalists, with some calling them “coup plotters” and threatening to confiscate cell phones and equipment.

“Three officers beat me,” said Néstor Arce, a journalist at Chamorro’s Confidencial weekly. “They kicked me in the leg trying to knock me down.”

Since April, Nicaragua has been experiencing one of its worst crises since a civil war in the 1980s. Protests raged for months before a government clampdown reined them in.

At least 322 people have been killed and more than 500 are incarcerated, according to the Nicaraguan Center for Human Rights, one of the groups that the government has blacklisted.

Ana Maria Tello, who works with the Inter-American Commission on Human Rights’ (IACHR) in Nicaragua, expressed concern at the “increase in repression against NGOs and independent media and journalists.”

The Ortega government did not respond to a request for comment about Saturday’s violence. Ortega has called the protests an attempt at a “coup d’état.”

The United States rolled out a tough new policy against socialist and communist regimes in South America on Nov. 1 while imposing new sanctions on Venezuela and Cuba and vowing to punish Nicaragua.

In a speech in Miami, national security adviser John Bolton condemned the communist and socialist governments of Venezuela, Cuba, and Nicaragua, calling them tyrannical regimes.

“This troika of tyranny, this triangle of terror stretching from Havana to Caracas to Managua, is the cause of immense human suffering, the impetus of enormous regional instability, and the genesis of a sordid cradle of communism in the Western Hemisphere,” Bolton said.

Bolton singled out Nicaragua for criticism over Ortega’s crackdown on political opponents, warning that the United States will follow through with tough sanctions.

Ortega ruled Nicaragua as a communist dictator for more than a decade before he was ousted in 1990. He returned to power after winning an election in 2006. Chavez, Venezuela’s socialist leader at the time, financed Ortega’s campaign.

Ortega’s family established a centralized system in which the government hands out lucrative contracts to his cronies. Despite mass protests, the family appears dead set on staying in power.

“Free, fair, and early elections must be held in Nicaragua, and democracy must be restored to the Nicaraguan people,” Bolton said. “Until then, the Nicaraguan regime, like Venezuela and Cuba, will feel the full weight of America’s robust sanctions regime.”