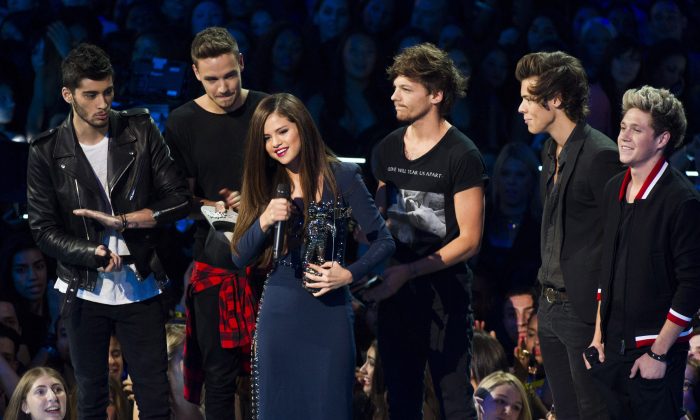 One Direction presents the award for best pop video for "Come and Get It" to Selena Gomez at the MTV Video Music Awards on Sunday, Aug. 25, 2013, at the Barclays Center in the Brooklyn borough of New York. (Charles Sykes/Invision/AP)
Entertainment

Rumors about Selena Gomez and Niall Horan are flying on Wednesday after a video was published that allegedly shows the pair sneaking into the Chateau Marmont WeHo in West Hollywood, California.

The video is far from conclusive, leading many to dismiss the rumors.

Gomez and Horan have been linked on a number of occasions but have never confirmed being together.

They were spotted in London holding hands earlier this year, for instance.

But Gomez is reportedly back with Justin Bieber after the pair were public about hanging out earlier this month.

“The video below features a couple in a dark car, which is driving into the parking lot of the exclusive hotel and celebrity haunt. It’s hard to tell of it is Selena in the clip and really, all we can say for sure is that the girl in the car had long dark hair, similar to that of the singer,” noted Unreality TV.

Fans weren’t happy with the rumors, commenting on Twitter. The term Niall and Selena was trending on Wednesday afternoon.

“”Niall and Selena” Please please please don’t mention them together on one sentence,” said one user.

“Well as you can see ladies and gentleman the one direction fandom is bored,” said another.

“If you think niall and Selena are dating please deactivate,” said yet another.

“Relax NIALL and SELENA are just friends! YOU GUYS NEED TO FIND YOUR CHILL MAN,” said another.