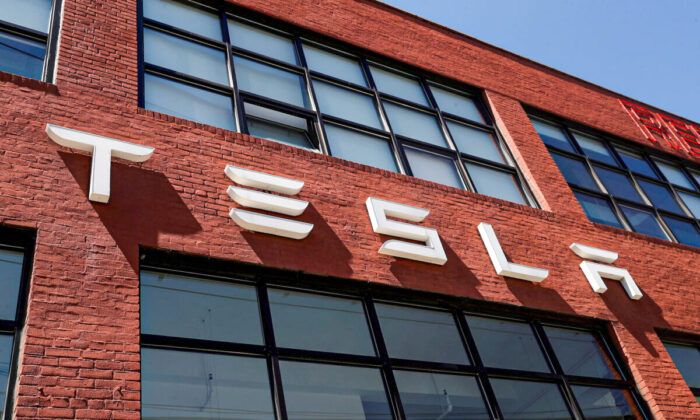 The Tesla logo is seen outside a dealership in the Brooklyn borough of New York on April 26, 2021. (Shannon Stapleton/Reuters)
US News

The National Highway Traffic Safety Administration (NHTSA) announced on Dec 22. that it has opened a formal investigation into Tesla over the safety of its front center touchscreen that could allow drivers to play video games while the vehicle is in motion.

The U.S. auto safety regulator said that it is looking into 580,000 Tesla vehicles sold since 2017 that have the feature.

Tesla’s CEO Elon Musk has promoted in-vehicle entertainment as he believes it will be highly desirable once vehicles become autonomous.

The touchscreen feature, which is called “Passenger Play,” may act as a distraction for the driver and thus increase the risk of a crash, according to the agency.

The New York Times reported earlier this month that a Tesla service update inserted a warning reading: “Playing while the car is in motion is only for passengers,” and that a button will ask for confirmation that the player is a passenger, though a driver could play simply by pressing the button.

“To date, the agency has received one owner complaint describing the gameplay functionality and has confirmed that this capability has been available since December 2020 in Tesla ‘Passenger Play’-equipped vehicles,” a NHTSA spokesman said in an email to The Associated Press and Reuters.

“Before this time, enabling gameplay was only possible when the vehicle was in park.”

The NHTSA said its preliminary evaluation covers various 2017-2022 Tesla Model 3, S, X, and Y vehicles, and that it would “evaluate aspects of the feature, including the frequency and use scenarios of Tesla ‘Passenger Play’.”

The agency said in its report that it was not aware of any crashes or injuries at this time that are linked to the feature.

A representative for Tesla could not be reached immediately for comment.

Distracted driving contributes to thousands of road deaths each year in the United States, according to the NHTSA. It says that official figures frequently underestimate the problem because so many drivers involved in crashes later deny being distracted.

Since 2013, the agency has issued guidelines regulating touchscreens and infotainment systems in all vehicles.

Tesla owner, Vince Patton, who lives near Portland, Oregon, filed the initial complaint with the NHTSA back in August, after he discovered that he could play a video game on his touchscreen while the vehicle was moving.

He urged the auto regulator to prohibit live video and interactive web browsing on the centrally-located front touchscreen while the vehicles are in motion.

“NHTSA needs to prohibit all live video in the front seat and all live interactive web browsing while the car is in motion,” Patton said in his complaint.

“Creating a dangerous distraction for the driver is recklessly negligent.”

The NHTSA’s preliminary investigation is a first step before it decides whether to upgrade the probe to an engineering analysis, which must happen before the agency can demand a recall.

The agency is already investigating 765,000 vehicles over Tesla’s Autopilot system, after a series of crashes involving the company’s cars and one or more parked emergency vehicles.

Tesla failed to file recall documents with the regulator when it did an over-the-air internet update in an effort to address the safety problem.

NHTSA is also looking into the performance of Tesla’s “Full Self-Driving” software after getting a complaint that it nearly caused a crash.

Tesla’s response was that neither system can drive vehicles autonomously and that drivers must be ready to intervene at all times.

The automaker said it would disable the entertainment feature while its cars are in motion, which was corrected with a server update.