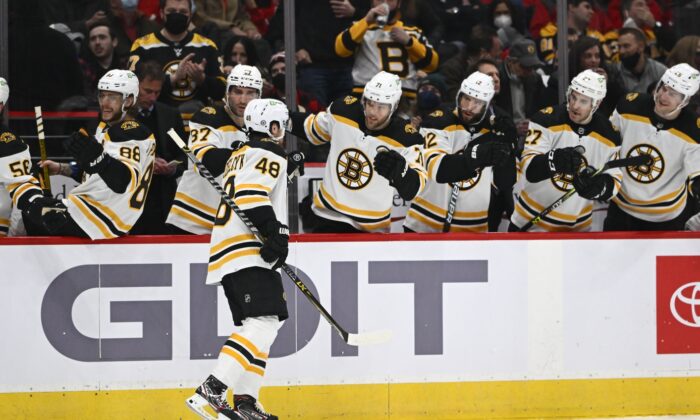 Boston Bruins defenseman Matt Grzelcyk (48) is congratulated by teammates, after scoring a goal against the Washington Capitals during an NHL game at Capital One Arena in Washington on Jan. 10, 2022. (Brad Mills/USA TODAY Sports via Field Level Media)
NHL

Matt Grzelcyk had a goal and four assists as the Boston Bruins recorded a 7–3 road win over the Washington Capitals on Monday.

It was a milestone night for Grzelcyk, who had never before recorded even three points in a game during his six NHL seasons.

David Pastrnak and Brad Marchand each scored two goals and added an assist for the Bruins, the second consecutive two-goal game for each of the forwards. Craig Smith had a goal and an assist, while Anton Blidh and Taylor Hall each had two assists. Erik Haula also scored for Boston.

Conor Sheary scored twice and T.J. Oshie added a goal for the Capitals, who are 0-2-2 in their past four games.

Nicolas Aube-Kubel had two goals, Nazem Kadri had a goal and an assist and Colorado rallied to beat Seattle in Denver.

Jared McCann and Marcus Johansson each had a goal and an assist for the Kraken. Colin Blackwell also scored and Philipp Grubauer had 31 saves against his former team.

Mika Zibanejad scored and Alexandar Georgiev made 36 saves for the Rangers, who had won four of their previous five.