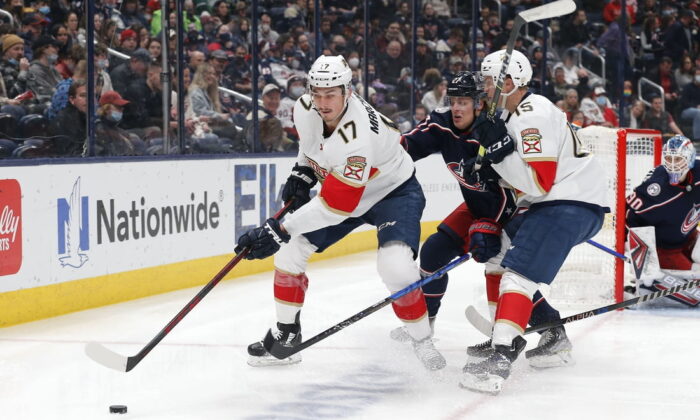 Mason Marchment tied a club record with six points, leading the Florida Panthers to an 8–4 win over the host Columbus Blue Jackets on Monday.

Marchment posted two goals and four assists on the night. He matched the franchise single-game points mark set by Olli Jokinen on March 17, 2007, against the New York Islanders.

Florida’s Anton Lundell had five assists to set a franchise rookie record for a single game. He is the first NHL rookie since the New York Islanders’ Mathew Barzal (Feb. 9, 2018) to register five assists in a game.

Sam Reinhart had a hat trick and one assist as Florida won its fourth straight game. The Panthers also got one goal each from Aleksander Barkov, Owen Tippett, and MacKenzie Weegar. The Blue Jackets were led by Patrik Laine, who had his second two-goal in as many nights, while Gustav Nyquist and Emil Bemstrom also scored.

Mitchell Marner added a goal and two assists, Ilya Mikheyev added a goal and an assist, and Jason Spezza also scored for the Maple Leafs, who have won four straight. Jack Campbell allowed three goals on nine shots before Petr Mrazek replaced him in the first period. Mrazek stopped 19 shots.

Jesper Boqvist had a goal and an assist for New Jersey. Pavel Zacha, Andreas Johnsson, and Nathan Bastian also scored. Akira Schmid made 27 saves for the Devils, who have lost five straight.

Jordan Oesterle scored his first goal of the season in overtime to give host Detroit a victory over Anaheim.

Dylan Larkin scored the Red Wings’ regulation goal. Alex Nedeljkovic needed to only make 14 saves for Detroit, which had given up five third-period goals in a 7–4 loss to the Maple Leafs on Saturday night.

Rickard Rakell scored his 10th goal of the season for the Ducks, who were wrapping up a five-game road swing. Anaheim finished with a 3–0–2 mark on the trip.

It was Stutzle’s eighth goal of the season, and the second-year forward’s first overtime winner in the NHL. Thomas Chabot had a goal and an assist for the Senators, and Tkachuk had two assists. Nick Paul collected Ottawa’s other goal.

Connor McDavid and Darnell Nurse each scored for the Oilers, with both goals bringing Edmonton level after Ottawa had taken the lead.

Alex Chiasson and Brock Boeser scored in the first two periods, and Vancouver hung on for a win at Chicago.

Luke Schenn added an empty-net goal for the Canucks, who are 2–0–2 in their past four games. Jaroslav Halak made 20 saves in his first appearance since Dec. 30, having been sidelined due to COVID-19 protocol.

Connor Murphy scored and Marc-Andre Fleury made 29 saves for the Blackhawks, who lost for the sixth time in their past seven games (1–4–2).